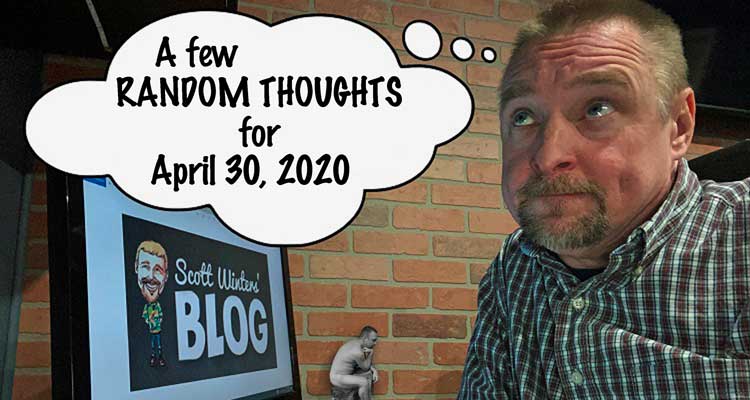 Look at that…the calendar says it is April 30th! The final day of April is finally here. Has this month felt like it’s been a year long?! Bring on May 1st tomorrow! Here are my “Random Thoughts” for Thursday…

According to the website put together by the Michigan Department of Health and Human Services, as of Wednesday afternoon at 3 pm there are 40.399 confirmed cases of COVID-19 in the state of Michigan. That number jumped up by 1,137 in 24 hours.

They are now also giving us the Cumulative Total of Recovered COVID-19 Cases. They will update this number every Saturday. As of April 25th, 8,342 have recovered from the virus.

A COUPLE OF OTHER CORONAVIRUS HEADLINES…

I was happy to see that my unemployment money made it into my bank account. That was pretty fast, as I just applied on Tuesday.

I still have not received my Coronavirus Tax Relief and Economic Impact Payment. I went to the irs.gov website yesterday and tried to update my information. It asked for my Adjusted Gross Income and the amount I owed for the last two years. I went and dug out my tax forms and punched in the numbers for 2019 and it said those numbers didn’t match. It then said to try the numbers for 2018. So I did! And once again I received the same error message.

I guess I just wait for the paper check to finally arrive. I’ve heard it could be the end of summer for some of those checks to make it to people.

When can we take our bottles and cans back?

I’m sure we all have a nice surplus of empty bottles and cans piling up somewhere in our homes.

The 10 cent refund on those things alone could almost pay my mortgage!

I think it’s time for stores to lift this restriction and start taking back our empty cans and bottles. If post office and package delivery workers can touch thousands of packages every day, I’m sure store workers can wear a mask and gloves and empty the bins in the can collectors and stay safe.

Also, remember to rinse those things out! With weather getting warmer, ants and other insects could become a problem as they are attracted the the sugary remains in the bottom of the cans and bottles. Rodents too could be an issue.

A LOT OF NAKEDNESS ON TV NEWS

First we had the report that an ABC correspondent was caught without his pants Tuesday on “Good Morning America”.

Will Reeve gave a report about pharmacies working to deliver prescriptions using drones. When he finished, Will threw it back to hosts Michael Strahan and Amy Robach — at which point, his lack of wardrobe came into view.

Will later clarified that he was wearing “shorts”, as some people thought he went commando. He also tweeted, “The more I look at this, the more thigh I see. Yikes.”

Will being caught without pants was nothing compared to what happened to one Spanish TV reporter.

Alfonso Merlos was broadcasting from his home when viewers caught a glimpse of a naked woman walking by in the background. Viewers were quick to notice that the mystery woman was not his girlfriend, Big Brother contestant Marta Lopez. Merlos explained that he and Lopez were on a break for a few days when he shacked up with the other woman, who happens to be a fellow journalist named Alexia Rivas.