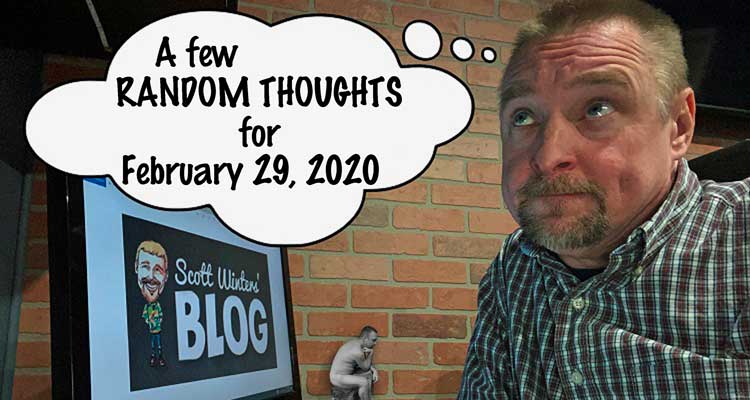 Happy Leap Day! We only get one of these every four years. Make the best of it! Here are today’s “Random Thoughts”… 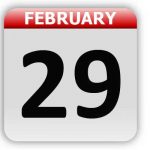 Do you know why we have a Leap Day?

A leap day is observed because the Earth’s period of orbital revolution around the Sun takes approximately six hours longer than 365 whole days. A leap day compensates for this lag, realigning the calendar with the Earth’s position in the Solar System; otherwise, seasons would occur later than intended in the calendar year.”

I always feel sorry for those people born on February 29th. They only get to celebrate their birthday every four years.

Some celebrities that were born on February 29th include motivational speaker Tony Robbins, who was born in 1960, and will be celebrating his 15th birthday. Model and actor Antonio Sabato Jr. was born in 1972, so he turns 12 today. Actor and rapper Ja Rule was born in 1976, making him 11 years old. Foster the People singer and guitarist Mark Foster is 9 today…he was born in 1984.

I have a few friends on Facebook also having a birthday today. A big HAPPY LEAP DAY BIRTHDAY to Jenn Leigh, Rachael Wolfort, and Doug Van Dyke.

Even though it’s great to get an extra day ever four years, why couldn’t they have added the day at perhaps the end of June or July — when it’s warm and sunny!

Is it time to create a calendar where we don’t have to have a Leap Day?

Steve Hanke and Richard Henry have created a new version of the calendar which has 364 days every year. Each calendar year will be exactly the same. The year will always begin on a Monday, and your birthday will fall on the same day of the week each year.

Additionally, February will always have 30 days, as will January, April, May, July, August, October and November. The other four months would have 31 days.

Christmas will always fall on a Sunday. All other U.S. federal holidays, except for Independence Day and Thanksgiving, will fall on a Monday.

The professors say they have drafted up an executive order, which they hope President Trump will review and ultimately sign.

There is NO way you will ever see a change to our calendar. It would have to be changed around the world. It is not something one country could do and the others ignore. Imagine the scheduling problem if every country had a different calendar they worked with. I do like the idea though.

If you use your smartphone for video or pictures, there are a lot of different apps that will add different items to your images.

One reporter, Justin Hinton from WLOS, was reporting on snowfall in North Carolina. He apparently had used his phone for some “random” images in the past. Some say he forgot to turn off the filter when he was doing a live report on Facebook and had no idea what was going on. Other people are saying he had someone actually changing the filters and it was just a stunt. Either way, it is still funny to watch…

That is exactly why I DO NOT use filters like this. My luck I would forget to shut them off as well.

MAYBE I NEED A DONKEY!

I mean who wouldn’t want an animal that you could refer to as an “ass”! (Yes, I’m still just a 12 year old boy at heart!)

I found this video of a donkey who gets so excited about his new toy.

I have never seen a donkey walk on its hind legs before!

I NEED YOUR HELP…

I have been having a discussion with the guy I work with to maintain my blog. We keep arguing about the best way to bring you my “Random Thoughts”. He feels that every story should be a separate blog post. I say that you enjoy seeing the stories all in one post every day.

So, instead of trying to guess how you’d like to see it done, we decided to just ask you…