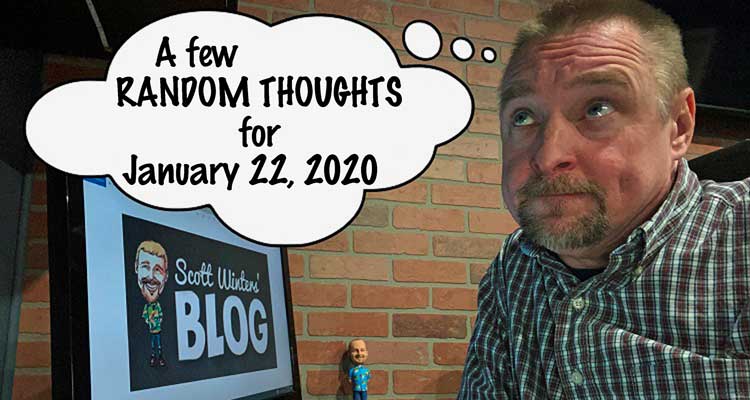 Wow, the week is half over already. I’ve engaged the brain. Here are today’s “Random Thoughts”…

Florida is in the middle of a cold snap. I saw a story the other day that some of the water parks down there are closing because of the cold.

On Tuesday, the National Weather Service in Miami issued a “Falling Iguana Alert”!

The lizards are cold blooded and the cold weather really slows them down. Some may even fall from trees. The iguanas should fully recover once it warms up.

I’ve been to Florida on several occasions. I never recall seeing any iguanas in the trees. I’ve see plenty of the little geckos, but never anything bigger. Maybe I just haven’t looked hard enough.

Terry Jones, a ‘Monty Python’ Co-Founder and British Comedy Icon, has died at the age of 77.

He had been suffering from dementia, which was revealed publicly by his son, Bill, in September of 2016. It left him unable to speak.

I hate to admit it, but I have never been a huge “Monty Python” fan. There is just something about British humor that doesn’t click with me, well, aside from Benny Hill.

I know there are a lot of “Monty Python” fans out there who are saddened today.

You can read more about Terry Jones here.

I’m not sure why, but in the last week or so on Facebook a post about the death of former Harlem Globetrotter Meadowlark Lemon has shown up almost daily.

The Harlem Globetrotters will be making an appearance at the Van Andel Arena this Sunday, January 26th.

Tomorrow will be “National Pie Day”, and to celebrate Grand Traverse Pie Company is offering a free slice of apple or cherry pie with any purchase all of its locations throughout Michigan and in Terre Haute, Indiana on Thursday, January 23rd.

This year’s free pie slices are made with Montmorency Cherries and Northern Spy Apples — both grown in Northern Michigan.

For more information, here is the official website for Grand Traverse Pie Company.

LOOKING FOR OLD RECORDINGS OF “THE RICK & SCOTT SHOW”

Every once in awhile I’ll talk to somebody who has an old cassette recording of “The Rick & Scott Show” from back in the day.

Do you have any old recordings of our show? I would love to borrow the tape and get the audio!

Back in the early 90’s, there just wasn’t a good and inexpensive way to archive all of that stuff, so I have some audio — but wish I had more.

This year I plan to get all of the audio I do have archived and up on the www.scottwintersblog.com website.

If you happen to have any old audio, please let me know!!

Enjoy your Wednesday. I’ll talk to you from 3-7 pm on 98.7 WFGR! Hopefully there will be no freeway closings for rush hour today.