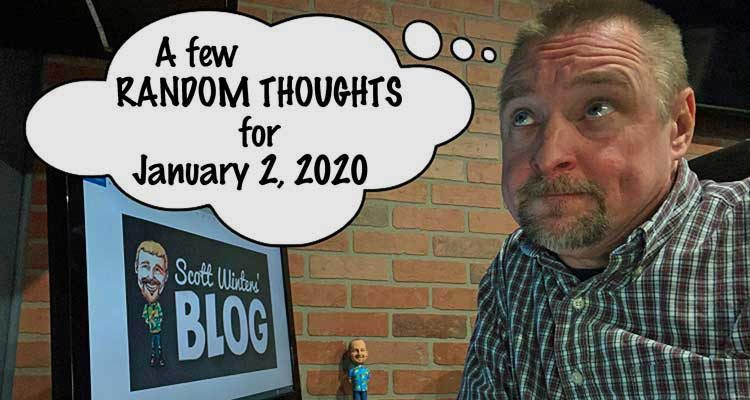 Let’s get started for this first Thursday of 2020…

WHAT DAY IS IT?

Today is another one of those Thursdays that feels like a Monday! As a matter of fact, when I first started typing out the title above I typed in “Monday, January 2nd”, instead of “Thursday”. These last two weeks have been brutal in trying to keep track of what day it is. You may have seen this video I posted last week…

In about another week I think I’d be pretty used to a schedule like this… work 2 days, get a day off, work 2 more days, get 2 more days off!

Over the years I have supported an origanization called Beautiful You by Profile. They provide various services to women going through cancer treatments. Once again this year, as a fundraiser, they are giving away a pair of Super Bowl tickets! Here is your chance to not only help out a great organization, but also have a chance of going to the SuperBowl in Miami on Sunday, February 2nd. Here are the details to purchase your raffle tickets…

Good Luck! And if you win, I AM available on February 2nd!

Jack Sheldon, best known as the voice behind “I’m Just a Bill”, “Conjunction Junction” and other songs on “Schoolhouse Rock”, has died at age 88 on Friday, December 27th. Sheldon also served as a sidekick for talk-show host Merv Griffin. I never realized that he was the guy who sang on the Schoolhouse Rock videos until I read the story of his passing. Here is a link for more information.

David Stern, former NBA commissioner, died after suffering a brain hemorrhage. We are just now hearing about this, but he passed away about three weeks ago, on Thursday, December 12th, He was 77. Here is a link for more information.

NOT A GOOD TIME FOR A SELFIE

The Detroit Fire Department is being criticized for a recent selfie they took.

Firefighters responded to a blaze at a vacant house on New Year’s Eve. They took the time to pose for a photo of the home which was engulfed in flames. The picture was then shared on the Detroit Fire Incidents Page on Facebook. The photo immediately drew a backlash of criticism on social media and was removed.

Detroit’s Fire Commissioner says he will investigate the circumstances of the photo and will take disciplinary action against those in the photo. According to reports, the firefighters were celebrating a retirement, and since the house was too dangerous to enter, they took a moment to snap a photo.

I have mixed feelings on this. I guess if the house was vacant and was already beyond saving, maybe they did a good thing by letting it just burn a little longer. It was going to have to be demolished anyway. It’s just not good P.R. to take the time out of fighting a fire to take a selfie! I’d be outraged if they house had actually been lived in by someone. Instead, it was vacant and probably about to be comdemned at some point anyway.

Here’s is your feel good story for the day…

The staff at the Heartland Farm Sanctuary in Verona, Wisconsin, recently went to great lengths to help a disabled chicken get around. The built the bird a tiny wheelchair!

The chicken was born with a slipped tendon in her leg. Instead of being able to strut around, the chicken — named Tuesday — was only able to hobble around.

To help her out, the staff created the special wheelchair out of plastic pipes. Tuesday has now become a fan favorite and an ambassador for the sanctuary.

Here is the story…

Time for me to shut my brain off for a bit. I need to head into the radio station shortly. Join me this afternoon from 3-7 pm on 98.7 WFGR. I’ll talk to you then!