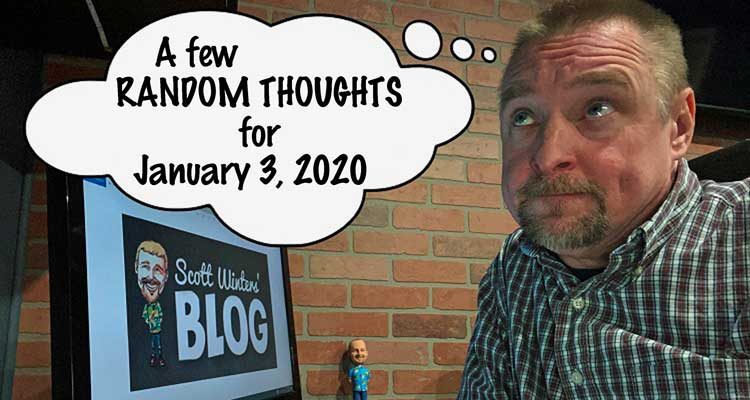 Let’s get started for this first Friday of 2020…

So I’ve decided 2020 is the year for me to start decluttering my life!

I’ve decided to start with my contact list on my phone. I only have about 1500 people listed in my phone!

It all started with my Palm Pilot in the ’90s. Over the years, I would just transfer the contact list from old device to new device. Rarely did I ever delete anyone.

I happened to notice a few days ago that I still had Rick Beckett’s contact information in my phone. He’s only been gone now for almost 11 years (the end of February) and I don’t think I’ll ever really need his old phone number again. Time to finally delete that one.

And how about all those old celebrity phone numbers. We did so many phone interviews over the years. Years ago, the stars would give you their home phone number to call them so that they didn’t have to pay long distance charges to call into your radio show (cheap bastards!). I have quite the list of celebrity phone numbers, however most of these were home phones, and I’m sure almost none of them even work anymore.

I have so many comedians in my contact list. I have the old numbers for Heywood Banks, Jeff Foxworthy, Red Peters, Bobby Slayton, Drew Carey, Victoria Jackson, Jimmy J.J. Walker, Emo Phillips, Judy Tenuta, Howie Mandel, Kevin Pollack, Mark McCollum, Rodney Carrington, John Valby, and so many more. I even have the home phone number for Busty Heart!

There are celebrities from Michigan like rocker Ted Nugent, actor/comedian Jeff Daniels, and the late Ernie Harwell (who I called and talked to oh so many times)

I also have the number for Dick Clark and Ed McMahon (both gone), game show host Chuck Woolery, along with the home number of Dawn Wells (Mary Ann from “Gilligan’s Island”), Donna Douglas (Ellie May from “The Beverly Hillbillies”) Maureen McKormick, Barry Williams and Christopher Knight from the “Brady Bunch”, Bob Hope, and Sofia Vergara from “Modern Family”…just to name a few.

Morning show producers would also share phone numbers. So I have numbers for some people that we never called…but I had their number! Celebrities like Tom Cruise, Sharon Stone (see the story about her below), one of the the loves of my life Sandra Bullock, Adam Sandler, and Julia Roberts. And that’s just scratching the surface!

I can’t begin to tell you how big the urge was to prank call some of these people after a few drinks some weekends…but I NEVER did. I respected their privacy.

POSSIBLY THE GREATEST INVENTION EVER!

Many people wake up every morning and use their Keurig machine to make their coffee. No more making a whole pot at a time. You can make just one cup of coffee, in the flavor of your choice, and it’s so simple and easy.

Well imagine if they had a similar device for soft serve ice cream!

Your dreams may have just come true!! LG is working on a device that does just that…

This little machine is like a Keurig for Ice Cream 🍦 pic.twitter.com/wEo6LZ325z

Where can I put my name on a waiting list?!

Looking for love in the New Year? Then circle this Sunday — January 5th — on your calendar. They say this Sunday is be the busiest day of the year for dating apps. It’s even been dubbed “Dating Sunday.” Whether it’s the nagging you heard over the holidays about your relationship status or a resolution to find love in the New Year…or the fact that Valentine’s Day is right around the corner…daters will be looking for love matches on Sunday. Get your profiles ready.

Now am I supposed to swipe “left” or “right”?

That leads into this story that I found humorous…

Sharon Stone was booted from the dating app “Bumble” for impersonating…Sharon Stone.

The actress went on Twitter last weekend to explain the situation…

I went on the @bumble dating sight and they closed my account. 👁👁
Some users reported that it couldn’t possibly be me!
Hey @bumble, is being me exclusionary ? 🤷🏼‍♀️
Don’t shut me out of the hive 🐝

A Bumble rep saw the tweet and responded, “Trust us, we *definitely* want you in the Hive.”

How does Sharon Stone have a problem getting dates?

And guys, don’t rush to sign up for Bumble thinking you have a chance to date Sharon Stone…in that dating app women must message you first (or so I’ve been told…no first hand experience!).

When I was in grade school learning about writing and journalism, I was introduced the the phrase: “When a dog bites a man, that is not news, because it happens so often. But if a man bites a dog, that is news.”

So, this must be news…

In Florida police were called after a homeowner reported a man was causing a disturbance in the backyard. When the cops arrived, they found the suspect rolling around naked in the mud and making loud bird noises. When approached, the 38-year-old tried to escape, hiding under the porch of a mobile home before finally emerging and then punching at least one deputy.

Two officers used stun guns on the nude man, but couldn’t subdue him, so they called for backup. Six more cops and a K-9 officer named “Casper” arrived on the scene. The sight of the dog caused the crazy man to get down on his hands and knees and bark — before lunging at the K-9 and biting its ear. “Casper” ultimately won the fight and pinned the man so he could be cuffed and hauled away.

Alright, the brain has been “paused”. Off to other items of business for the day. I’ll talk to you this afternoon from 3-7 pm on 98.7 WFGR.