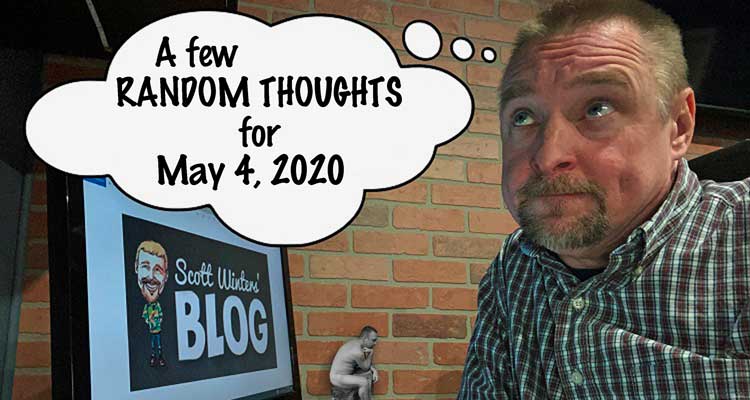 I loved the weather over the weekend, but wait until next weekend. More on that later. Let’s get this week started! Here are today’s “Random Thoughts”…

According to the website put together by the Michigan Department of Health and Human Services, as of Sunday afternoon at 3 pm there are 43,754 confirmed cases of COVID-19 in the state of Michigan. That number jumped up by 547 in 24 hours.

With everything we have had thrown at us already in the year 2020, what could be next?

Now scientists are telling us about this huge hornet, called the murder hornet, that has made it’s way to the  United States.

This roughly 2-inch long insect has made its way to the U.S. for the first time ever. The Asian giant hornet has been known to kill up to 50 people a year in Japan and has the potential to devastate U.S. bee populations.

These things have been spotted in Washington state.

Bug experts say these hornets do not typically go after humans, but if they do, not even beekeeping suits can protect against the hornets. Their stingers are longer and more dangerous than a bee’s. The murder hornet’s sting is painful and packed with neurotoxins. Even if someone is not allergic to the hornet, multiple stings have the potential to kill.

After the beautiful weather over the weekend, get ready for a cool down.

From the National Weather Service in Grand Rapids: “FROM FRIDAY INTO SATURDAY TEMPERATURES ARE FORECAST TO FALL AND A CLOSED UPPER LOW WILL BE NEAR OR OVER US. SOME  LAKE ENHANCED SHOWERS ARE MORE THAN POSSIBLE. GIVEN HOW COLD THE  AIR WILL BE THEN, MORE THAN LIKELY THIS WOULD MOSTLY BE SNOW  SHOWERS. THE COLDEST AIR WILL BE FRIDAY INTO SATURDAY. HIGHS WOULD STRUGGLE TO GET TO THE MID 40S, SO IT WOULD BE MORE THAN POSSIBLE TO SET A FEW RECORD LOW HIGHS. RECORD LOWS FOR THE 8TH AND 9TH ARE MOSTLY IN  THE MID 20S. IF WE GOT THE SKY TO  CLEAR ONE OF THOSE NIGHTS. THIS WOULD BE A HARD FREEZE AND  TEMPERATURES MAY BE BELOW FREEZING FOR MORE THAN 6 HOURS IN MOST  LOCATIONS BOTH FRIDAY NIGHT AND SATURDAY NIGHT.”

Can’t we at least have sunny and warm temperatures to help us get through all of this?!

I SAW THE LIGHTS!

Several people on social media have been inquiring about what the string of lights they see in the sky from time to time are.

They are actually the Starlink satellites. It’s a train of 60 satellites that are orbiting around the earth. Starlink is a satellite constellation being constructed by SpaceX to provide satellite Internet access. (Read more about it here.)

I was able to see them on Sunday night. It looks like your next chance to see them will be at 5:33 am on Tuesday morning. There is a very cool website that will tell you when you can see these satellites, along with other satellites and the International Space Station. Check out the website to see which direction to be looking.