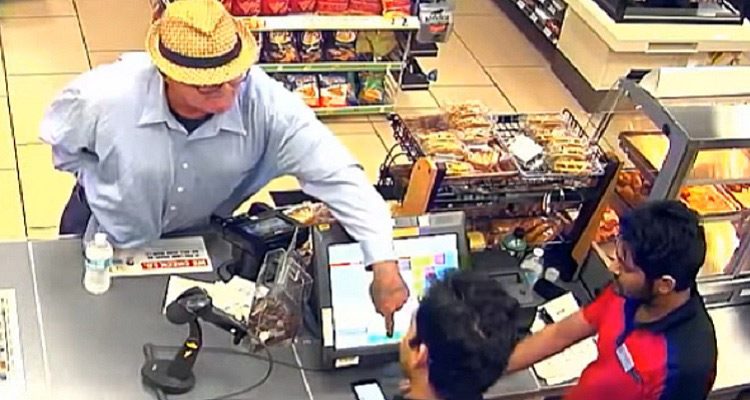 As kids we used to play “cops and robbers” and we used our finger as a gun. Well some men never grow up and do the same thing in their adult life…

Police in Los Angeles, CA, are looking for the public’s help in identifying a robber who held up a 7-Eleven store with…his finger!

The police have released surveillance video showing the man holding what he claimed to be a gun under his shirt and then behind his back. As the man moves his hand behind his back you can see it’s not really a gun at all, but either just his finger or maybe a pen.

In the video the man jumped over the counter and ordered the cashiers to take money out of the cash register or he would shoot. He ended up grabbing $300 and ran out of the store.

The video provides a great look at the guy. Authorities are hoping someone comes forward and can identify the man.

Also, when you watch the video…notice the other customer in the store. He becomes aware of what’s going on and just leaves…without paying for his items either. So technically the video shows two thieves!

Here is the video…(Caution: the video contains some adult language)