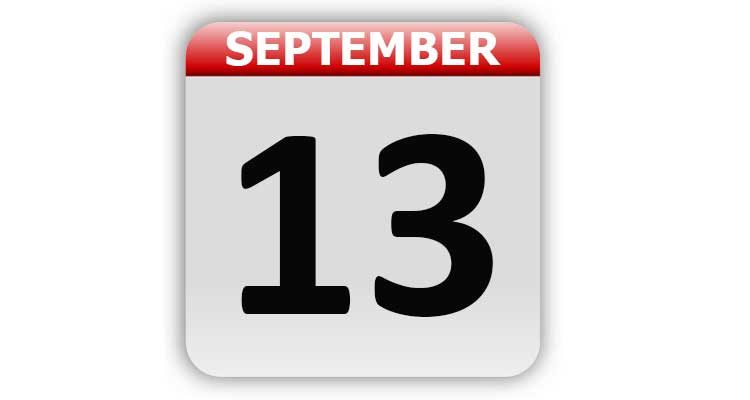 1501 – Michelangelo began work on his statue of David.

1788 – It was decided that the first federal election would be held on Wednesday the following February (1789) by the Constitutional Convention. On that day, George Washington was elected as the first President of the United States. Also, New York, NY, was named the temporary National Capital.

1789 – The United States Government took out its first loan.

1870 – The railroad line from Fort Wayne, IN to Grand Rapids, MI was opened for business.

1814 – In a turning point in the War of 1812, the British failed to capture Baltimore. It was during this battle that Francis Scott Key would compose his poem “Defence of Fort McHenry”. The poem would later be set to music and become the National Athem of the United States.

1890 – The last railroad tie was laid for the Grand Rapids & Indiana Railroad.

1898 – Celluloid photographic film, which is used to make movies, was patented by Hannibal Williston Goodwin.

1899 – Henry Bliss was the first person in the U.S. to be killed in an automobile accident.

1948 – Margaret Chase Smith was elected to the U.S. Senate. She became the first woman to serve in both houses of the U.S. Congress.

1956 – The IBM 305 RAMAC was introduced. It was the first commercial computer to use disk storage.

1959 – The Soviet Union’s Luna 2 became the first space probe to reach the Moon. It was launched the day before.

1960 – Payola was banned by the U.S. Federal Communications Commission.

1969 – The Hanna-Barbera cartoon “Scooby Doo, Where Are You?”, debuted on CBS TV’s Saturday morning lineup.

1971 – The World Hockey Association was formed.

1985 – Super Mario Bros. was released in Japan for NES, which started the Super Mario series of games.

1988 – Hurricane Gilbert was the strongest recorded hurricane in the Western Hemisphere based on parametric pressure. It was replaced by Hurricane Wilma in 2005.

2001 – Secretary of State Colin Powell named Osama bin Laden as the prime suspect in the terror attacks on the United States on September 11, 2001. Civilian aircraft traffic resumed in the U.S. for the first time in two days.

2004 – Each of the 276 studio audience members at Oprah Winfrey’s season premiere received the keys to a new Pontiac G-6 sedan!

2004 – The law banning private possession of 19 types of semi-automatic weapons expired. The Bush administration was criticized for bowing to the National Rifle Association, which opposed extending the ban, and for not urging Congress to extend it.

2007 – The National Football League dished out $750,000 in fines against the New England Patriots and the team’s head coach, Bill Belichick, for using video cameras to steal the signals of opposing teams. The team was caught in the act while trouncing the New York Jets days earlier. The team would also lose a first-round draft pick.

2008 – Hurricane Ike made landfall on the Texas Gulf Coast, causing heavy damage to Galveston Island, Houston, and the surrounding areas.

Tags: A Look Back, Celebrity Birthdays, Days of the Year, September 13, Today in History