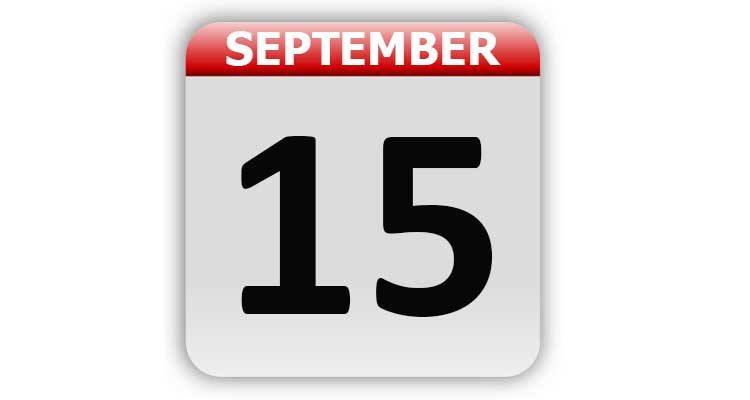 1775 – An early and unofficial American flag was raised by Lieutenant Colonel Isaac Mott after the seizing of Fort Johnson from the British. The flag was dark blue with “Liberty” spelled on it in white.

1853 – Reverend Antoinette Brown Blackwell was ordained. She became the first female minister in the United States.

1857 – A typesetting machine was patented by Timothy Alder.

1858 – The first mail service began to the Pacific Coast under government contract. It took stagecoaches from the Butterfield Overland Mail Company 12 days to make the journey between Tipton, MO and San Francisco, CA.

1909 – A New York judge ruled that Ford Motor Company had infringed on George Seldon’s patent for the “Road Engine.” The ruling was later overturned.

1949 – The TV series “The Lone Ranger” premiered on ABC. Clayton Moore was the Lone Ranger and Jay Silverheels was Tonto.

1953 – The National Boxing Association adopted the 10-point scoring system for all of its matches.

1956 – The earliest snowfall ever recorded in Grand Rapids, MI.

1978 – At the Superdome in New Orleans, LA, Muhammad Ali defeated Leon Spinks in a rematch to win his 3rd World Heavyweight Boxing title.

1981 – The Senate Judiciary Committee unanimously approved Sandra Day O’Connor to become the first female Justice of the Supreme Court of the United States.

1998 – Reba McEntire received a star on the Hollywood Walk of Fame.

2002 – The season premiere of “The Sopranos” was the most-watched show in HBO history, with 13.4-million viewers.

2004 – National Hockey League commissioner Gary Bettman announced the lockout of the players union and cessation of operations by the NHL head office.

2016 – The Samsung Galaxy Note 7 was recalled because they would catch on fire. The phones were replaced with updated phones with different batteries that ended up doing the same thing. A month later the company stopped production of the phones.

Tags: A Look Back, Celebrity Birthdays, Days of the Year, September 15, Today in History