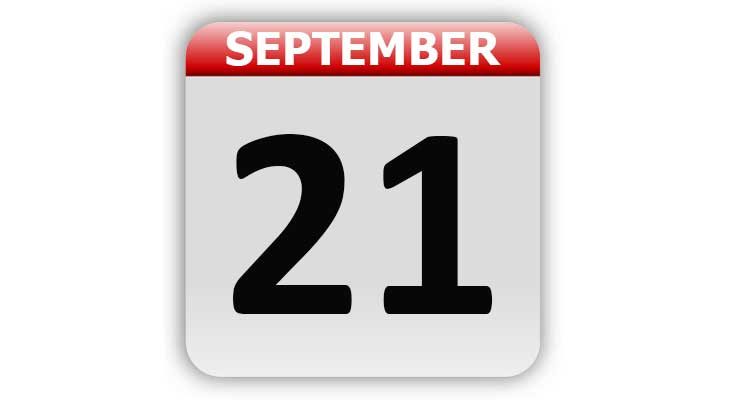 1784 – The first daily paper in America, “The Pennsylvania Packet and Daily Advertiser”, was published for the first time in Philadelphia, PA.

1897 – The New York Sun ran the “Yes, Virginia, there is a Santa Claus” editorial in response to a letter from 8-year-old Virginia O’Hanlon.

1937 – “The Hobbit”, a fantasy novel by British professor J.R.R. Tolkien, was first published.

1948 – Milton Berle debuted as the host of the television show “The Texaco Star Theater” on NBC. The show was later renamed “The Milton Berle Show” with Berle being the regular host until 1967.

1957 – The television series “Perry Mason” made its debut on CBS. The show was on for 9 years.

1966 – The Soviet probe Zond 5 returned to Earth. The spacecraft completed the first unmanned round-trip flight to the moon.

1970 – “NFL Monday Night Football” made its debut on ABC. The game was between the Cleveland Browns and the New York Jets. The Browns beat the Jets 31-21.

1973 – Henry Kissinger was confirmed by the U.S. Senate to become 56th Secretary of State. He became the first naturalized citizen to hold that office.

1981 – The U.S. Senate confirmed Sandra Day O’Connor to be the first female Justice on the U.S. Supreme Court.

1982 – The National Football League players began a 57-day strike. It was their first regular-season walkout.

1989 – The Senate Armed Forces Committee unanimously confirmed General Colin Powell to be chairman of the Joint Chiefs of Staff.

1998 – President Bill Clinton’s videotaped grand jury testimony was publicly broadcast. Clinton tussled with prosecutors over “the truth of my relationship” with Monica Lewinsky.

2001 – A multi-network broadcast of “America: A Tribute to Heroes”, was a fundraising telethon for the victims of September 11th. Appearing on the tribute were Jim Carrey, George Clooney, Tom Cruise, Cameron Diaz, Robert De Niro, Clint Eastwood, Calista Flockhart, Kelsey Grammer, Tom Hanks, Julia Roberts, Will Smith, Brad Pitt and Robin Williams. It was broadcast on over 35 network and cable channels and raised over $200 million.

2003 – The Galileo robot spacecraft mission was terminated at the end of it’s eight-year mission by sending the probe into Jupiter’s atmosphere, where it was crushed by the pressure at the lower altitudes.

Tags: A Look Back, Celebrity Birthdays, Days of the Year, September 21, Today in History