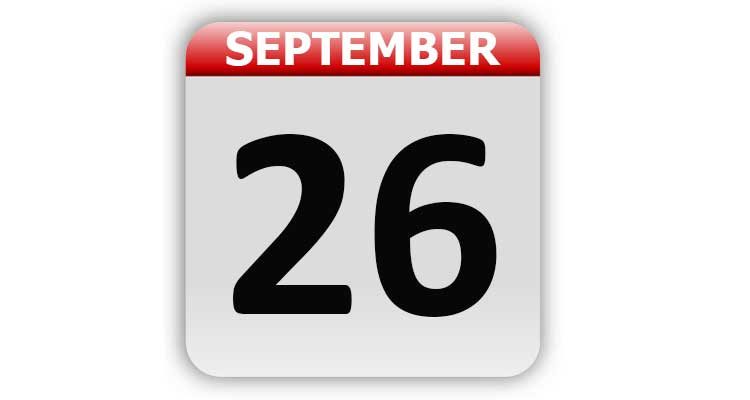 1903 – The Grand Rapids Speedrome, in Comstock Park, MI, opened for auto racing on its one mile track. It closed in 1966. It was located about where US-131 is today.

1905 – Albert Einstein published his first paper on the special theory of relativity.

1949 – A new “Stadium” opened in Grand Rapids, MI. The first act was Spike Jones. The venue was located at 2500 Turner Avenue. It was most recently known as the DeltaPlex, before closing in 2022.

1962 – The television show “The Beverly Hillbillies” debuted on CBS.

1969 – “Abbey Road”, the last recorded album by The Beatles, was released.

1969 – The television show “The Brady Bunch” premiered on ABC.

1973 – The Concorde made its first non-stop crossing of the Atlantic in record-breaking time.

1975 – The movie “The Rocky Horror Picture Show” opened in theaters.

1985 – Shamu was born at Sea World in Orlando, FL. Shamu was the first killer whale born in captivity to survive.

1986 – A television episode of “Dallas” aired in which Bobby Ewing returned from the dead.

1986 – William H. Rehnquist was sworn in as the 16th Chief Justice of the United States Supreme Court following the retirement of Warren Burger. Antonin Scalia became the 103rd Associate Justice.

1988 – Ben Johnson was stripped of his gold medal in the 100 m sprint at the Seoul Olympics for failing a drug test.

1990 – The Motion Picture Association of America announced its new rating, NC-17. The rating was designed to bar those under 17 from certain films without the commercial stigma of the old X rating.

1991 – Four men and four women began their two-year stay inside the sealed off structure known as “Biosphere II”, in Oracle, AZ. The project was intended to develop technology for future space colonies.

1993 – The eight people who had stayed in “Biosphere II” emerged from their sealed off environment.

1995 – The prosecution began its closing arguments in the murder trial of O.J. Simpson.

1996 – Astronaut Shannon Lucid returned to Earth after being in space for 188 days. She set a time record for both a U.S. astronaut in space and longest time spent by a woman in space in the world.

2006 – Facebook was opened up to everyone at least 13 years or older who had a valid email address.

International Day for the Total Elimination of Nuclear Weapons

Tags: A Look Back, Celebrity Birthdays, Days of the Year, September 26, Today in History