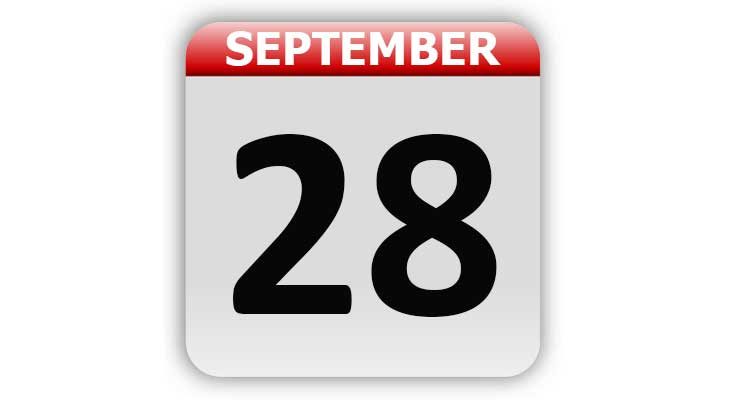 1787 – The newly completed United States Constitution was voted on by the U.S. Congress to be sent to the state legislatures for approval.

1789 – The first Federal Congress passed a resolution to ask President George Washington to recommend to the nation a day of thanksgiving. Several days later Washington issued a proclamation that named Thursday, November 26, 1789 as a “Day of Public Thanksgiving.” On December 26, 1941, the date for Thanksgiving Day was set as the fourth Thursday of November.

1850 – The U.S. Navy abolished flogging as a form of punishment.

1892 – The first nighttime football game under electric lights took place in the United States. The game was between the Mansfield State Normal School and the Wyoming Seminary.

1924 – Two U.S. Army planes completed the first around-the-world flight when they landed in Seattle, WA. It took 175 days to complete the trip.

1951 – CBS made the first color televisions available for sale to the general public, but the product was discontinued less than a month later.

1955 – The World Series was seen on TV in color for the first time. The game was between the New York Yankees and the Brooklyn Dodgers.

1963 – The animated antics of “Tennessee Tuxedo and his Tales” began as the cartoon premiered on TV.

1963 – The song “She Loves You”, by the Beatles, was played on the radio in New York, NY, by Murray The K. It was the first time a Beatles song was played in the U.S.

1974 – First Lady Betty Ford underwent a mastectomy at Bethesda Naval Medical Center in Maryland to remove a lump in her breast.

1997 – The DVD format was introduced at the Audio Engineering Society convention.

2001 – The movie “Zoolander” premiered in theaters.

2004 – Nate Olive and Sarah Jones arrived at the U.S.-Mexico border to complete the first known continuous hike of the 1,800 mile trail down the U.S. Pacific Coast. They started their journey on June 8.

2004 – Randy Travis received a star on the Hollywood Walk of Fame.

2008 – SpaceX launched the first private spacecraft, the Falcon 1, into orbit.

Tags: A Look Back, Celebrity Birthdays, Days of the Year, September 28, Today in History