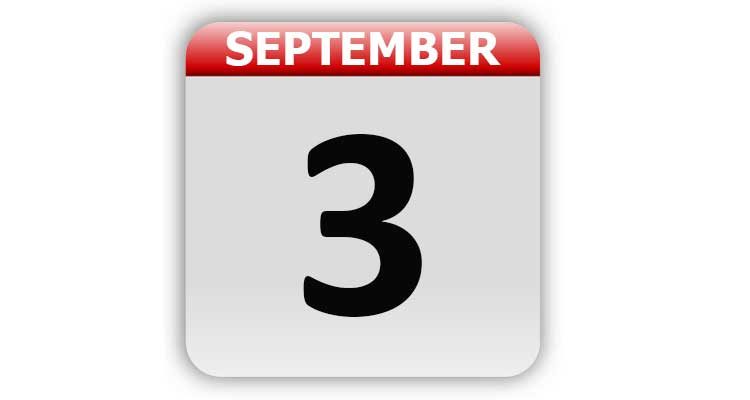 1783 – The United States and England signed the Treaty of Paris and ended the Revolutionary War. Michigan remained in British hands for 13 years after the Treaty was signed.

1833 – “The New York Sun” was launched by Benjamin H. Day. It became the first successful penny newspaper in the United States.

1895 – The first professional football game was played in Latrobe, PA. The Latrobe YMCA defeated the Jeannette Athletic Club with a score of 12-0.

1911 – Orville and Wilbur Wright brought a Wright Biplane to the West Michigan Fair in Grand Rapids, MI. They gave rides to the brave.

1935 – Sir Malcolm Campbell became the first person to drive an automobile over 300 miles an hour. At the Bonneville Salt Flats in Utah, he reached a speed of 304.331 mph.

1954 – The German submarine U-505 submarine began its move from a specifically constructed dock to its site at the Museum of Science and Industry in Chicago, IL.

1976 – The U.S. Spacecraft Viking 2 landed at Utopia Planitia on Mars. The unmanned spacecraft took the first close-up, color photos of the planet’s surface.

2009 – Ten weeks after his death, Michael Jackson was buried at Forest Lawn Memorial Park in Glendale, CA. The cost for his burial was reportedly in excess of a million dollars.

2010 – In Devon, England, Mike Edwards (Electric Light Orchestra) was killed when a giant bale of hay tumbled down a hill and crashed into his van.

Tags: A Look Back, Celebrity Birthdays, Days of the Year, September 3, Today in History