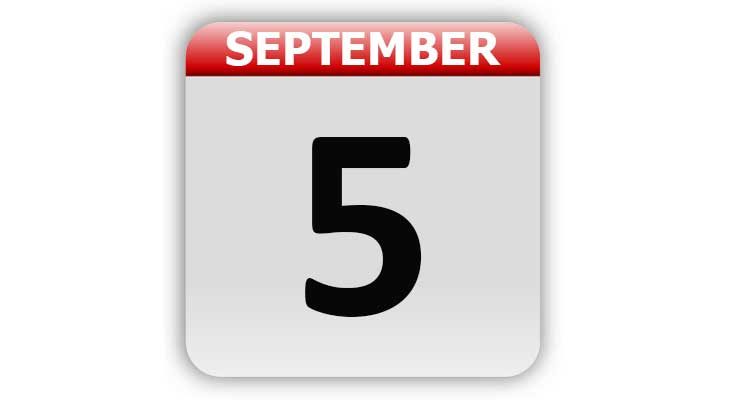 1877 – Sioux Indian chief Crazy Horse was killed by the bayonet of a U.S. soldier at Fort Robinson in Nebraska. The chief allegedly resisted confinement to a jail cell.

1881 – The American Red Cross provided relief for disaster for the first time. The disaster was the Great Fire of 1881 in Michigan. Several days of severe forest fires caused widespread damage and death in the thumb area of Michigan. 282 died.

1885 – Jake Gumper bought the first gasoline pump to be manufactured in the U.S.

1914 – Babe Ruth hit his first home run as a professional player in the International League.

1930 – Charles Creighton and James Hagris completed the drive from New York, NY to Los Angeles, CA and back to New York — all in reverse gear. The trip took 42 days in their 1929 Ford Model A.

1945 – Iva Toguri D’Aquino was arrested. D’Aquino was suspected of being the wartime radio propagandist “Tokyo Rose”. She served six years and was later pardoned by President Gerald Ford.

1958 – The first color videotaped program was aired. It was “The Betty Freezor Show” on WBTV-TV in Charlotte, NC.

1958 – Boris Pasternak’s “Doctor Zhivago” was published for the first time in the U.S.

1961 – The U.S. government made airline hijacking a federal offense.

1966 – Jerry Lewis hosted his first Muscular Dystrophy Telethon on a New York station. He raised a million dollars in pledges to fight the disease. It later became a nationally broadcast event. Lewis hosted the telethon annually until 2010.

1983 – “Sports Illustrated” became the first national weekly magazine to use four-color process illustrations on every page.

1984 – The Space Shuttle Discovery (STS-41-D) landed after its maiden voyage.

1987 – “American Bandstand” was cancelled after 30 years on television.

1989 – Deborah Norville became the news anchor of the “Today” show.

1992 – A General Motors Corporation strike ended with a new agreement being approved. Nearly 43,000 workers were on strike.

1996 – Hurricane Fran made landfall near Cape Fear, NC as a Category 3 storm with 115 mph sustained winds. Fran caused over $3 billion in damages and killed 27 people.

2003 – In London, magician David Blaine entered a clear plastic box which was then suspended by a crane over the banks of the Thames River. He remained there until October 19 surviving only on water.

2017 – The Ribbon Cutting Ceremony was held for Little Caesars Arena in Detroit.

National Be Late for Something Day

Tags: A Look Back, Celebrity Birthdays, Days of the Year, September 5, Today in History