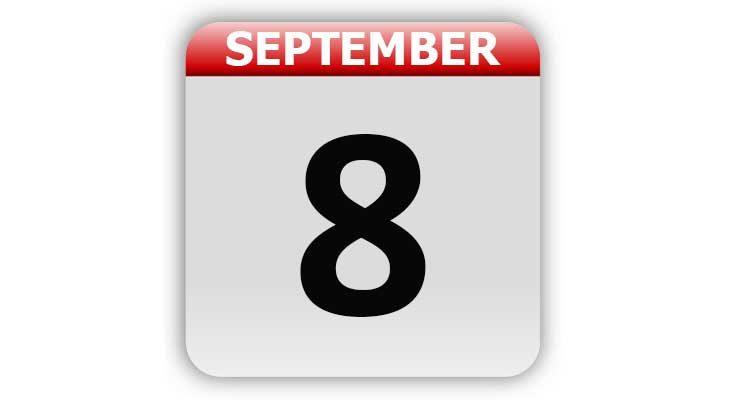 1565 – The first permanent European settlement in North America was established by a Spanish expedition at St. Augustine, FL.

1860 – The steamship Lady Elgin sank on Lake Michigan, with the loss of around 300 lives.

1866 – The first recorded birth of sextuplets took place in Chicago, IL. The parents were James and Jennie Bushnell.

1892 – An early version of “The Pledge of Allegiance” was first recited.

1945 – A bus equipped with a two-way radio was put into service for the first time in Washington, DC.

1945 – Bess Myerson of New York, NY was crowned “Miss America”. She was the first Jewish contestant to win the title.

1952 – The Ernest Hemingway novel “The Old Man and the Sea” was published.

1974 – President Gerald Ford granted a “full, free, and absolute pardon” to former President Richard Nixon for any crimes Nixon may have committed while in office.

1988 – Yellowstone National Park was closed for the first time due to ongoing fires.

1996 – The children’s TV show “Blue’s Clues” premiered on Nickelodeon. It was originally hosted by Steve Burns, who left in 2002 and was replaced by Donovan Patton.

1998 – Mark McGwire, of the St. Louis Cardinals, hit his 62nd home run of the season. He had beaten a record that had stood for 37 years by Roger Maris. McGwire would eventually reach 70 home runs on September 27.

1999 – Russia’s Mission Control switched off the Mir space station’s central computer and other systems to save energy during a planned six months of unmanned flights.

2015 – British researchers announced that evidence of a larger version of Stonehenge had been located about 2 miles from the Stonehenge location. There were 90 buried stones that had been found by ground penetrating radar.

2016 – NASA launched OSIRIS-REx, its first asteroid sample return mission. The probe will visit 101955 Bennu and is expected to return with samples in 2023

Tags: A Look Back, Celebrity Birthdays, Days of the Year, September 8, Today in History