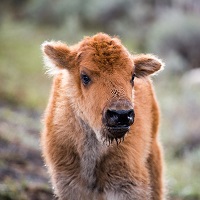 Did you forget to pack your brain?

One of my favorite vacation spots is Yellowstone National Park. I have been out there about a half dozen times over the years.

The thing I admire most about the park is how the wildlife remains there in their natural habitat and “most” tourists and visitors know to leave them alone and let them live the life of a wild animal.

You may have noticed I said “most”. I’m amazed when you pull into the park they have to give you a sheet of paper warning you to not get close to the buffalo/bison because these animals can cause great bodily harm. And yet every year there are a few people who try to get that great selfie standing next to a buffalo and end up getting trampled or gored.

Last week some tourists from out of the country were visiting Yellowstone National Park and saw a young bison calf roaming alongside the road. These idiots decided that they thought the calf was cold and so they loaded up the animal in the back of their SUV and drove it to a ranger station.

Once they arrived the rangers told them what idiots they were and unloaded the calf from the vehicle. The rangers then took the calf back to the area the tourists had originally picked it up.

Here are the details of the entire event: Yellowstone Tourists Worried Bison Calf is Cold, So They Put It in their Car

Today on their Facebook page, Yellowstone rangers are reporting that they “tried repeatedly to reunite the newborn bison calf with the herd. These efforts failed. The bison calf was later euthanized because it was abandoned and causing a dangerous situation by continually approaching people and cars along the roadway.” You can read the entire post here on the Yellowstone Facebook Page.

If they just would have left well enough alone the poor thing would still be alive. Wildlife is exactly that… leave it in the wild and don’t try to interfere.