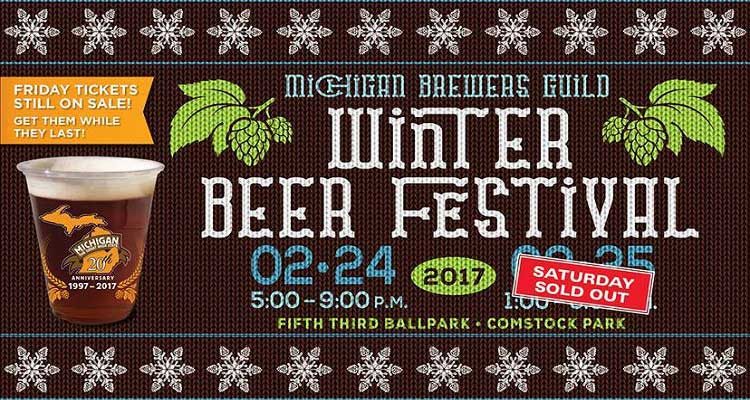 969 Beers from 130 Breweries at Winter Beer Fest this Weekend

With the spring-like weather we have been having, it’s hard to believe that this weekend is the 12th Annual Michigan Brewers Guild Winter Beer Festival, February 24-25 at Fifth Third Ballpark in Comstock Park.

Friday’s weather could still be in the low 60’s with maybe even a chance of a thunderstorm (the end of February!). Saturday looks like more traditional Winter Beer Fest weather with a forecast calling for a chance of snow and temps around 30.

Regardless of the weather, about 10,000 people will be enjoying themselves at the Winter Beer Festival. It is Michigan’s original winter craft beer celebration — one of four annual events presented by the state’s official trade organization, held by the brewers, for the brewers.

This year you will find 969 beers from 130 breweries at the 2-day event. Saturday is sold out, however tickets for Friday are available for $45 in advance and $50 at the gate (if available). You can purchase tickets online here.

If you want to plan your beer sampling out in advance, here is a link to the Michigan Brewers Guild website that lists not only the 130 breweries who will be in attendance, but also the 969 beers that they will be bringing to the festival!

As you can see, there is a beer for just about any taste you desire!

Have fun this weekend, but please drink responsibly… Don’t drink and drive.