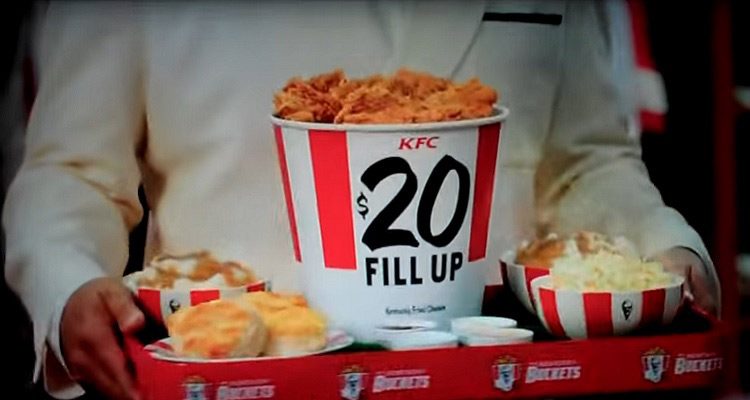 Woman Sues KFC Over Too Much Chicken

It all comes down to truth in advertising… Now KFC is being sued for showing too much chicken in their TV commercial.

Anna Wurtzburger, a 64-year-old widow from New York bought a $20 bucket of chicken last summer. She was hoping to find it overflowing with fried poultry like the bucket she saw in the commercial. However, Anna found the bucket to only be half full. In her lawsuit it states that in the commercial for the $20 Fill-Up KFC shows “an overflowing bucket of chicken”. When she got home with her bucket of chicken she asked herself “Where’s the chicken”? She was hoping to be able to get a couple of meals from her bucket purchase. She is living off Social Security, so being able to purchase KFC is a treat.

KFC responded saying its menu clearly states the $20 Fill-Up comes with eight pieces, and that’s exactly what Wurtzburger got. The company explained that it has to show the bucket overflowing so viewers can see the chicken. Anna’s response was “if you want the public to look at your chicken, put it in a dish”. The ad also claims the eight piece Fill-Up can feed a family of four. Anna says that’s untrue because they are small pieces.

In an effort to try to smooth Anna’s ruffled feathers, KFC offered her $70 in coupons — but she turned them down. Instead, she’s suing KFC for $20 million (now that’s a lot of chicken!). She said, “It’s the principle of the matter. Sometimes you gotta hit people where they feel the hurt.” KFC calls her lawsuit “meritless.”

Here is the commercial advertising the $20 Fill Up… (It does show a lot of chicken in that bucket!)

You Be the Judge: