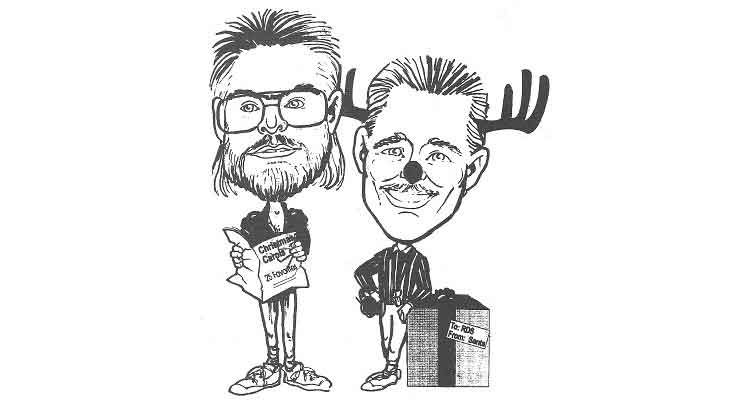 The year was 1997. Why is it so hard to believe that was 24 years ago! Definitely doesn’t seem that long.

This was the first year I started doing a Christmas Music show both Christmas Eve and Christmas morning on WGRD. The very first show was all pre-recorded and ran off of a CD. I spent weeks recording and producing the show. Looking back it’s probably a good thing I did it that way — because there is still a copy of that very first show! Our Program Director at the time came up with the name “Christmas Music for Fat Guys in Red Suits”. I wasn’t a big fan of the name, but he was the boss!

The next couple of years I would do the show live, once again just me in the studio. In 1999 Rick Beckett decided he would join me. We would do the show live on Christmas Eve until midnight and then I would be back to do a show live (by myself) at 6 am Christmas morning. Unfortunately those shows were never recorded. Or, if they were recorded, they were never archived because we always figured there would never be a need for those shows, as they would be outdated and never air again. That means I have NO recordings of the shows Rick and I did together. (I have had a few people tell me they might have an old cassette recording of the show. If they do — and they send me a copy — I will gladly share that audio!)

As a special surprise this year, I am posting the entire three-hour show that I did solo back in 1997. You can listen to this on your computer, tablet or smartphone.

I hope you enjoy listening to the show from so many years ago. It includes many Christmas classics we used to play on our morning show, along with some cool TV clips.

I’d also like to wish you all a VERY MERRY CHRISTMAS! Thank you so much for being such a loyal listener all these years! When I first hit the radio airwaves in Grand Rapids in the late ’80s, I never thought I’d still be doing it all these years later!!

(If there are any music licensing issues, these files will be taken down upon request of the copyright holders.)