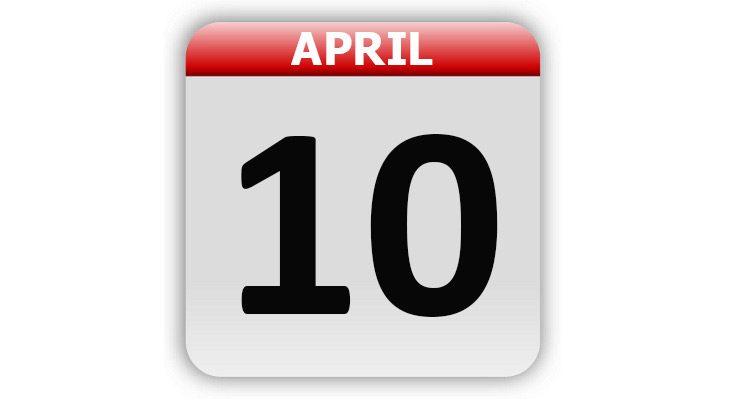 1790 – The U.S. patent system was established when President George Washington signed the Patent Act of 1790 into law.

1866 – The American Society for Prevention of Cruelty to Animals (ASPCA) was founded in New York, NY by Henry Bergh.

1872 – The first Arbor Day was celebrated in Nebraska.

1912 – The Titanic set sail on her maiden, and only, voyage from Southampton, England.

1930 – The first synthetic rubber was produced.

1941 – Ford Motor Co. became the last major automaker to recognize the United Auto Workers as the representative for its workers.

1953 – Warner Bros. released “House of Wax”. It was the first 3-D movie to be released by a major Hollywood studio.

1965 – The DeZwaan Windmill was formally dedicated in Holland, MI.

1967 – The 13-day strike by the American Federation of Radio-TV Artists (AFTRA) came to an end less than two hours before the 39th Academy Awards presentation went on the air.

1970 – Paul McCartney announced that he was leaving The Beatles for personal and professional reasons.

1981 – The maiden launch of the Space Shuttle Columbia was cancelled because of a computer malfunction.

1988 – On Wall Street, 48 million shares of Navistar International stock changed hands in a single-block trade. It was the largest transaction ever executed on the New York Stock Exchange.

1992 – Outside Needles, CA, comedian Sam Kinison was killed when a pickup truck slammed into his car on a desert road between Los Angeles, CA and Las Vegas, NV.

1992 – In Los Angeles, financier Charles Keating Jr. was sentenced to nine years in prison for swindling investors when his Lincoln Savings and Loan collapsed. The convictions were later overturned.

1997 – Rod Steiger received a star on the Hollywood Walk of Fame.

2002 – President George W. Bush called for a total ban on human cloning. He urged the Senate to pass legislation forbidding the procedures for both reproductive and research purposes.

2007 – “Girls Gone Wild” founder Joe Francis surrendered to federal authorities in Florida, five days after a judge cites him for contempt of court.

2014 – After establishing himself on “The Daily Show” and “The Colbert Report”, Stephen Colbert was named to be David Letterman’s successor on “The Late Show”. (He assumed the role on September 8th, 2015.)

2014 – Nirvana, KISS, Peter Gabriel, The E Street Band, Cat Stevens, Hall and Oates, and Linda Ronstadt were inducted into the Rock and Roll Hall of Fame.

2014 – Kathleen Sebelius resigned as Secretary of the U.S. Department of Health and Human Services, in light of fallout from the botched rollout of HealthCare.gov.

2017 – After 29 years, the Detroit Pistons played their last game at the Palace of Auburn Hills in a game against the Washington Wizards.

2019 – Scientists from the Event Horizon Telescope project announced the first ever image of a black hole, located in the centre of the M87 galaxy.

Tags: A Look Back, April 10, Celebrity Birthdays, Days of the Year, Today in History