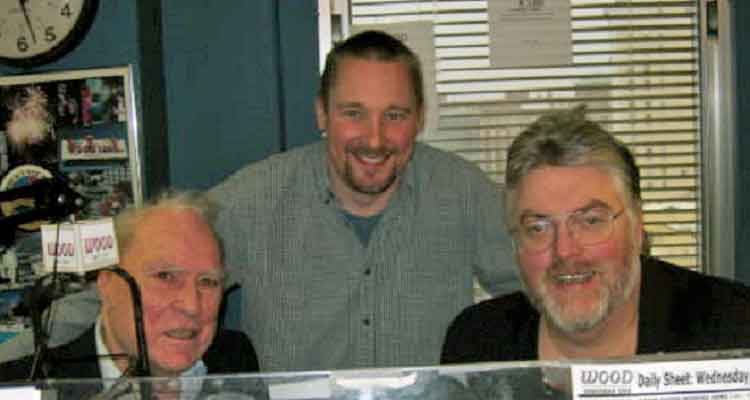 Long time WOOD Radio morning personality Bruce Grant dominated the West Michigan airwaves for many years. He retired from his weekday morning show duties in 1985. Until 1991, he would do weekend and fill-in shifts. Once he finally retired, Bruce chose to stay out of the public spotlight. It would be many years before anyone could coax him to get behind a microphone and put on a pair of headphones again.

On April 12th, 2006, WOOD Radio’s “The Rick & Scott Show” was able to get Bruce into the radio station once again! It would end up being the last time Bruce would be “on the air” in West Michigan.

Bruce, a native of the Cincinnati area, started his Grand Rapids radio career on AM 1230 WJEF in 1949. He moved to WGRD as program director in the mid 50’s, then on to do mornings on WOOD in 1959. Bruce was the morning personality on WOOD from 59 until 1986.

Upon Bruce’s death, WOOD Radio posted the following story about him on their website:

“Bruce R. Grant was born on December 14th, 1923 in Cincinnati, Ohio. At the age of twelve, he began playing second lead harmonica with the biggest country and western spectacular of its day, “The Early Morning Country & Western Entertainers,” starring Cowboy Copas, Merle Travis, and Red Foley, which was broadcast on Cincinnati’s WSAI radio.

Bruce’s entourage toured Cincinnati, Boston, Baltimore, Cleveland, Detroit, and St. Louis during summers. After graduating from high school, Bruce attended the University of Cincinnati and the Schuster-Martin School of Drama.

Bruce Grant was a WWII Marine who served his country in the Pacific Theatre.

Grant began his radio Grand Rapids radio career on WJEF in 1949. After five years, Bruce was hired as program director and announcer at WGRD. In 1959, Bruce Grant began his service at WOOD RADIO earning recognition and awards along the way. In addition to his duties behind the WOOD RADIO microphone, Grant also led the radio station’s many charitable efforts.

At his celebrity roast prior to retirement, Grant downplayed his accomplishments telling a capacity crowd at the Amway Grand Plaza’s Ambassador Ballroom that he was honored to be a part of so many lives and watch the growth of Grand Rapids. After withstanding the many radio and television celebrities and their kind-hearted barbs, Grant broke celebrity roast tradition. Rather than return fire, Grant said he’d learned long ago “if a gentleman doesn’t have something nice to say, he shouldn’t say anything at all.”

Following his retirement from his morning show duties in 1985, Grant remained busy with the occasional WOOD RADIO weekend broadcast and charitable work with March of Dimes, Red Cross and Muscular Dystrophy among others, eventually leaving radio in 1991.”

Skip Essick was the WOOD Radio Program Director from 1982 to 1989. He returned to Grand Rapids years later to be the General Manager for ClearChannel Grand Rapids from 1996 to 2007. Skip now writes his own blog called “This is Skip Essick, signing off”. He recently wrote about an altercation he had while working with Bruce Grant.

Bruce Grant was a radio institution here in West Michigan for many years. I grew up hearing his voice coming out of my parent’s radio while getting ready for school in the morning. I am honored to have not only listened to Bruce, but having the pleasure of having him on our show, “The Rick and Scott Show”, before his passing. Hearing Bruce’s voice again was much like hearing Tiger announcer Ernie Harwell on the air. It took me back to a simpler time of growing up in the 60s, 70s and 80s. I felt truly honored to be working with Mr. Grant for those few hours back on April 12th, 2006…sharing the airwaves on WOOD 1300!