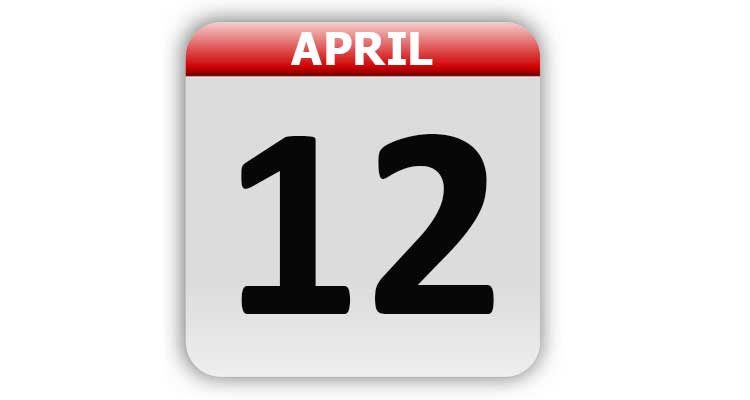 1877 – A catcher’s mask was used in a baseball game for the first time by James Alexander Tyng.

1934 – The strongest surface wind gust in the world at 231 mph, was measured on the summit of Mount Washington, NH. It is still the highest wind ever recorded in the U.S..

1938 – The first U.S. law requiring a medical test for a marriage license was enacted in New York.

1945 – In New York, NY, the organization of the first eye bank, the Eye Bank for Sight Restoration, was announced.

1945 – President Franklin D. Roosevelt died in Warm Spring, GA of a cerebral hemorrhage at the age of 63. Harry S. Truman was sworn in as the 33rd President.

1955 – The University of Michigan Polio Vaccine Evaluation Center announced that the polio vaccine of Dr. Jonas Salk was “safe, effective and potent”.

1966 – Jan Berry (Jan & Dean) crashed his car near “Dead Man’s Curve” in Beverly Hills, CA. He suffered severe head injuries and was in a coma for nearly two months.

1981 – The Space Shuttle Columbia (STS-1) blasted off from Cape Canaveral, FL, on its first test flight.

1984 – Astronauts aboard the Space Shuttle Challenger made the first satellite repair in orbit by returning the Solar Max satellite to space.

1985 – U.S. Senator Jake Garn of Utah became the first (but not the last) Senator to fly in space as the Shuttle Discovery lifted off from Cape Canaveral, FL.

1985 – Federal inspectors declared that four animals of the Ringling Brothers and Barnum & Bailey Circus were not unicorns. They were goats with horns that had been surgically implanted.

1987 – Texaco filed Chapter 11 bankruptcy after it failed to settle a legal dispute with Pennzoil Co.

1988 – Harvard University won a patent for a genetically altered mouse. It was the first patent for a life form.

1990 – James Brown was released from a South Carolina jail on work furlough after serving 15 months of a six-year sentence for aggravated assault.

1992 – The Euro Disney Resort officially opened with its theme park Euro Disneyland in Marne-La-Vallee, France. The resort and its park’s name were subsequently changed to Disneyland Paris.

2002 – Ozzy Osbourne received a star on the Hollywood Walk of Fame.

2012 – The game “Candy Crush Saga” was released on Facebook.

International Be Kind to Lawyers Day

Walk on Your Wild Side Day

Tags: A Look Back, April 12, Celebrity Birthdays, Days of the Year, Today in History