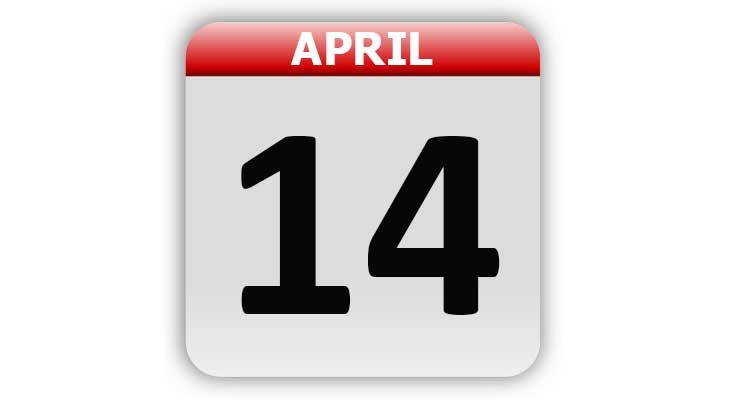 1775 – The first abolitionist society in the U.S. was organized in Philadelphia, PA with Ben Franklin as President.

1828 – The first edition of Noah Webster’s dictionary was published under the name “American Dictionary of the English Language”.

1865 – President Abraham Lincoln was assassinated in Ford’s Theater in Washington, DC, by John Wilkes Booth. He actually died early the next morning.

1910 – President William Howard Taft threw out the first ball for the Washington Senators and the Philadelphia Athletics.

1939 – The John Steinbeck novel “The Grapes of Wrath” was first published.

1959 – The Taft Memorial Bell Tower was dedicated in Washington, DC.

1969 – For the first time, a major league baseball game was played in Montreal, Canada.

1969 – At the Academy Awards there was a tie for the Best Actress between Katharine Hepburn and Barbra Streisand.

1977 – The Renaissance Center opened in Detroit, MI. It had a 73-story tower and four 35-story buildings.

1981 – America’s first Space Shuttle, Columbia, returned to Earth after a three-day test flight. The Shuttle orbited the Earth 36 times during the mission.

1984 – The Texas Board of Education began requiring that the state’s public school textbooks describe the evolution of human beings as “theory rather than fact”.

1990 – Cal Ripken, of the Baltimore Orioles, began a streak of 95 errorless games and 431 total chances by a shortstop.

2004 – Dick Clark announced he has had adult onset diabetes since 1994. Clark had a deal with Merck pharmaceuticals to promote their diabetes medications.

2008 – Delta Air Lines and Northwest Airlines announced they were combining.

2020 – More than a quarter of Michigan’s workforce had filed unemployment claims because of COVID-19.

National Look Up at the Sky Day

National Reach as High as You Can Day

Tags: A Look Back, April 14, Celebrity Birthdays, Days of the Year, Today in History