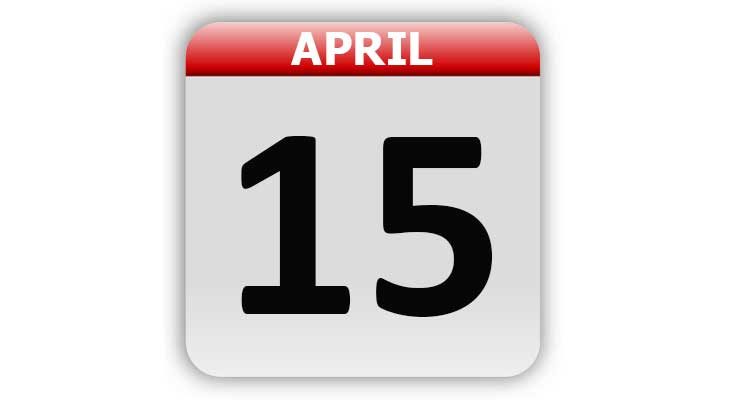 1817 – The first American school for the deaf was opened in Hartford, CT.

1850 – The city of San Francisco, CA was incorporated.

1892 – The General Electric Company was organized.

1912 – The ocean liner Titanic sank in the North Atlantic at 2:20 am, two hours and forty minutes after hitting an iceberg the evening before. 1,517 people died and only 710 people survived.

1927 – Douglas Fairbanks and Mary Pickford were the first stars to leave their footprints in cement at Grauman’s Chinese Theater in Hollywood, CA.

1934 – In the comic strip “Blondie,” Dagwood and Blondie Bumstead welcomed a baby boy, Alexander. The child would be nicknamed, Baby Dumpling.

1947 – Jackie Robinson became the first African American player to appear in a regular season Major League baseball game. Playing first base for the Brooklyn Dodgers, he went hitless but scored the winning run in a 5-3 victory over the Boston Braves at Ebbets Field.

1956 – The worlds’ first, all-color TV station was dedicated. It was WNBQ-TV in Chicago, IL and is now WMAQ-TV.

1956 – General Motors announced that the first free piston automobile had been developed.

1964 – The first Ford Mustang rolled off the showroom floor, two days before it was set to go on sale nationwide.

1974 – Patty Hearst robbed a bank with her kidnappers, members of the Symbionese Liberation Army.

1982 – Billy Joel was seriously hurt in a motorcycle accident on Long Island, New York. He went to the hospital and stayed for over a month undergoing therapy on his injured hand.

1983 – The movie “Flashdance” opened in a thousand theaters.

1994 – The World Trade Organization was established.

1997 – Christopher Reeve received a star on the Hollywood Walk of Fame.

2010 – In Prospect Harbor, ME, the Stinson Seafood plant stopped sardine processing after 135 years in operation.

2013 – Two pressure cooker bombs were detonated near the finish line of the Boston marathon in Boston, MA, killing three and injuring 264 others. The attack, which led to a lock-down and a massive four day manhunt across the city, turned out to be the work of the Tsarnaev brothers, Chechen immigrants holding radical Muslim views.

2019 – The cathedral of Notre-Dame de Paris in France was seriously damaged by a large fire.

Tags: A Look Back, April 15, Celebrity Birthdays, Days of the Year, Today in History