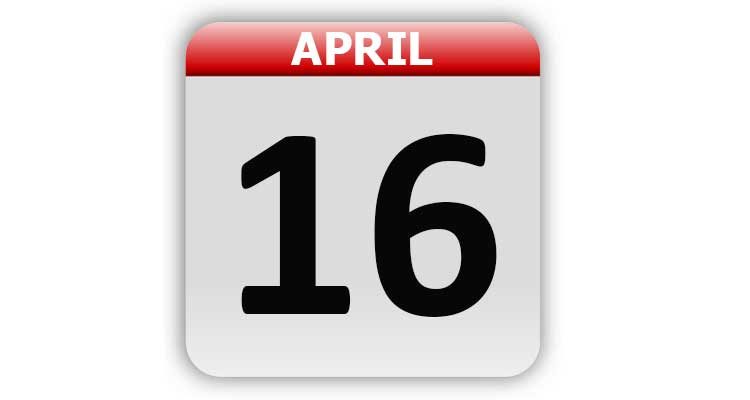 1905 – Andrew Carnegie donated $10,000,000 of personal money to set up the Carnegie Foundation for the Advancement of Teaching.

1940 – The first no-hit, no-run game to be thrown on an opening day of the major league baseball season was earned by Bob Feller. The Cleveland Indians beat the Chicago White Sox 1-0.

1943 – In Basel, Switzerland, chemist Albert Hoffman accidentally discovered the the hallucinogenic effects of LSD-25 while working on the medicinal value of lysergic acid.

1947 – The Zoomar lens, invented by Dr. Frank Back, was demonstrated in New York, NY. It was the first lens to exhibit zooming effects.

1966 – Sherman Poppen of Muskegon, MI was issued a patent for a “surf-type snow ski”. He called the sport toy a “snurfer”. He sold the idea to Brunswick Corp and it was sold beginning Christmas of 1966. It is considered to be the original snowboard.

1968 – The Pentagon announced that troops would begin coming home from Vietnam.

1972 – Apollo 16 blasted off from Cape Canaveral, FL, on a voyage to the Moon. It was the fifth manned Moon landing.

1972 – Two giants pandas, named Ling-Ling and Hsing-Hsing, arrived in the U.S. from China. They would reside at the National Zoo in Washington, DC.

1985 – Mickey Mantle was reinstated after being banned from baseball for several years.

1987 – The Federal Communications Commission (FCC) sternly warned U.S. radio stations to watch the use of indecent language on the airwaves.

1993 – Two of the four Los Angeles, CA police officers charged with violating Rodney King’s rights are convicted. The other two are acquitted.

1994 – Minnie Pearl and her $1.98 hat entered the National Comedy Hall of Fame. She was the very first female inductee.

1999 – Wayne Gretzky announced his retirement from the National Hockey League.

2007 – In Blacksburg, VA, a student opens fire on the campus of Virginia Tech University, killing 32 and injuring at least 28 people before committing suicide. The gunman is later identified as Cho SeungHui, a student at the school.

Save The Elephant Day

Tags: A Look Back, April 16, Celebrity Birthdays, Days of the Year, Today in History