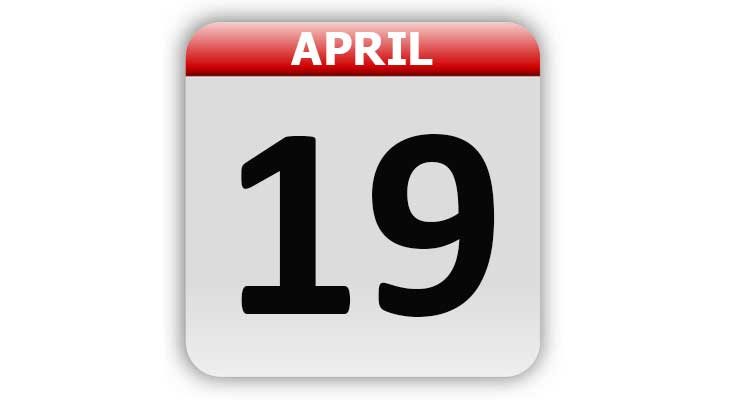 1775 – The American Revolution began as fighting broke out at Lexington, MA.

1892 – The Duryea gasoline buggy was introduced in the U.S. by Charles and Frank Duryea.

1911 – In Grand Rapids, MI, some 4,000 workers waked off their jobs at 35 furniture shops. They stayed out 19 weeks in a strike for better pay and improved working conditions.

1933 – President Franklin D. Roosevelt issued a proclamation that removed the U.S. from the gold standard.

1939 – Connecticut approved the Bill of Rights for the U.S. Constitution after 148 years.

1951 – General Douglas MacArthur gave his “Old Soldiers” speech before Congress after being relieved by President Harry Truman. In the address General MacArthur said that “Old soldiers never die, they just fade away.”

1967 – Surveyor 3 landed on the moon and began sending photos back to the U.S.

1971 – Russia launched the Salyut into orbit around Earth. It was the first space station.

1987 – In Phoenix, AZ, skydiver Gregory Robertson went into a 200-mph free-fall to save an unconscious colleague 3,500 feet from the ground.

1987 – The last California condor known to be in the wild was captured and placed in a breeding program at the San Diego Wild Animal Park.

1987 – “The Simpsons” premiered as a short cartoon on television’s “The Tracy Ullman Show”.

1988 – Sonny Bono was inaugurated as the Mayor of Palm Springs, CA.

1993 – The Branch-Davidian’s compound in Waco, TX, burned to the ground. It was the end of a 51-day standoff between the cult and U.S. federal agents. 86 people were killed including 17 children. Nine of the Branch Davidians escaped the fire.

1995 – The Alfred P. Murrah Federal Building in Oklahoma City, OK, was destroyed by a bomb. It was the worst bombing on U.S. territory. 168 people were killed including 19 children, and 500 were injured. Timothy McVeigh was found guilty of the bombing on June 2, 1997.

2000 – The Oklahoma City National Memorial was dedicated on the fifth anniversary of the bombing in Oklahoma that killed 168 people.

2002 – The movie “My Big Fat Greek Wedding” debuted in theaters.

2002 – The USS Cole was relaunched. In Yemen, 17 sailors were killed when the ship was attacked by terrorists on October 12, 2000. The attack was blamed on Osama bin Laden’s al-Qaida network.

2005 – Cardinal Joseph Ratzinger was elected to the papacy and became Pope Benedict XVI.

2013 – Boston Marathon bombings suspect Tamerlan Tsarnaev was killed in a shootout with police. His brother Dzhokhar Tsarnaev was captured while hiding in a boat inside a backyard in Watertown, MA.

2021 – NASA’s Ingenuity helicopter achieved the first flight on another planet.

Poetry and the Creative Mind Day

Tags: A Look Back, April 19, Celebrity Birthdays, Days of the Year, Today in History