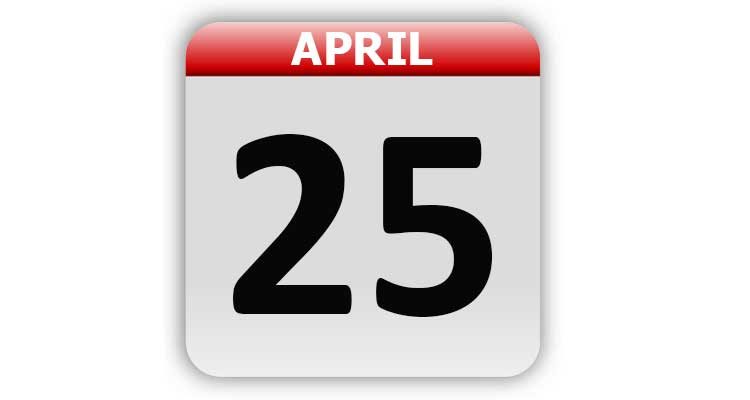 1846 – The Mexican-American War ignited as a result of disputes over claims to Texas boundaries. The outcome of the war fixed Texas’ southern boundary at the Rio Grande River.

1901 – The Detroit Tigers played their first game at home as a major league team against the Milwaukee Brewers at Bennett Park.

1901 – New York became the first state to require license plates for cars. The fee was $1.

1961 – Robert Noyce was granted a patent for the integrated circuit.

1966 – Jack Valenti, an aide to President Lyndon Johnson, was hired as the head of the Motion Picture Association of America. A position he held for 38 years. While there, he created movie ratings.

1976 – It was rollercoaster spring weather in West Michigan. After four days with temperatures in the 80s from the 15th to the 18th, temperatures dropped back into the 30s with 3″ of heavy wet snow falling in Grand Rapids, MI.

1983 – The Pioneer 10 spacecraft crossed Pluto’s orbit, speeding on its endless voyage through the Milky Way.

1990 – The U.S. Hubble Space Telescope was placed into Earth’s orbit. It was released by the Space Shuttle Discovery.

1998 – First Lady Hillary Rodham Clinton was questioned by Whitewater prosecutors on videotape about her work as a private lawyer for the failed savings and loan at the center of the investigation.

2000 – In a move to preserve public areas, the National Park Service prohibited the recreational use of snowmobiles in nearly all national parks, monuments and recreational areas.

2003 – Southwest Airlines fired two pilots for “inappropriate conduct” after they removed most of their clothes in the cockpit of a Boeing 737.

2005 – “Runaway Bride” Jennifer Wilbanks turned up in Albuquerque, NM after claiming she had been abducted.

2018 – Ford Motor Company announced that in the near future they would be condensing their line of U.S. car models to just the Mustang and the forthcoming Focus Active. The company would still manufacture a range of SUVs and trucks, including the Escape, Explorer, Bronco, and F-150.

Tags: A Look Back, April 25, Celebrity Birthdays, Days of the Year, Today in History