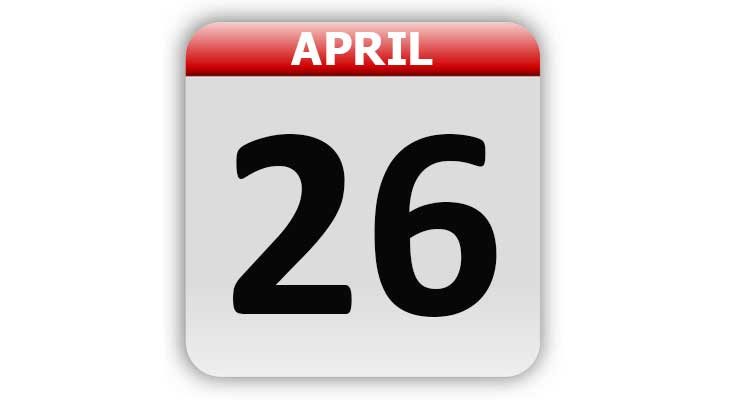 1514 – Copernicus made his first observations of Saturn.

1607 – The British established an American colony at Cape Henry, VA. It was the first permanent English establishment in the Western Hemisphere.

1906 – In Hawaii, motion pictures were shown for the first time.

1921 – Weather broadcasts were heard for the first time on radio in St. Louis, MO.

1931 – New York Yankee Lou Gehrig hit a home run but was called out for passing a runner.

1941 – The Chicago Cubs became the first baseball team to install an organ in their ballpark.

1963 – The state of Michigan started to require seatbelts in all new vehicles.

1964 – The Boston Celtics won their sixth consecutive NBA title. They won two more before the streak came to an end.

1975 – B.J. Thomas had the longest title of a number one song at the top of the “Billboard” popular music chart. The song was “(Hey Won’t You Play) Another Somebody Done Somebody Wrong Song.”

1991 – The TV show “Dinosaurs”, featuring a family of dinosaurs named Sinclair, debuted on ABC. It would run until its final episode on October 19, 1994.

1993 – It was announced that Conan O’Brien would succeed David Letterman as host of NBC’s “Late Night” show.

1986 – The world’s worst nuclear disaster to date occurred at the Chernobyl in the Soviet Union. Thirty-one people died in the incident and thousands more were exposed to radioactive material.

2002 – The Senate and House agreed on the Farm Bill. The measure, the cost of which topped $100 billion, increased subsidies to farmers and fund conservation programs.

2018 – Comedian/actor Bill Cosby was found guilty on three counts of aggravated indecent assault. The guilty verdict came on the second day of jury deliberations in a Montgomery County, PA Courthouse. Each charge carried a potential sentence of ten years in prison.

2019 – Marvel Studios’ blockbuster film, “Avengers: Endgame”, was released. The film had a budget of $356 million, making it one of the most expensive movies ever made. It went on to become the highest-grossing film of all time, surpassing the previous box office record of “Avatar”.

Jessica Lynch – 39 years old (1983) – U.S. Army soldier (First successfully rescued POW since the Vietnam War and the first ever of a woman)

Tags: A Look Back, April 26, Celebrity Birthdays, Days of the Year, Today in History