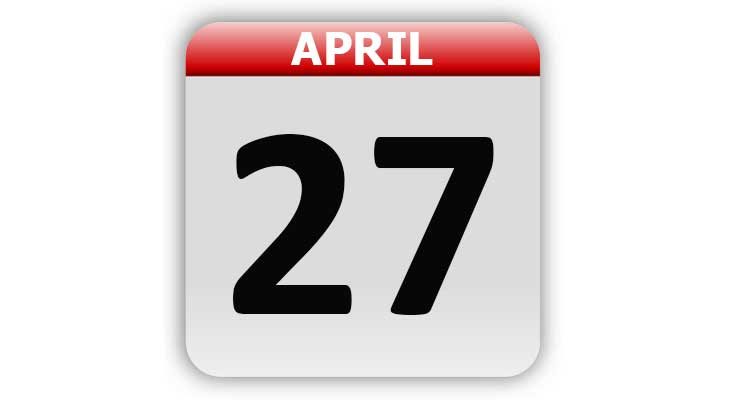 4977 B.C. – German Astronomer Johannes Kepler claimed that the world was created on this date.

1938 – A colored baseball was used for the first time in any baseball game. The ball was yellow and was used between Columbia and Fordham Universities in New York, NY.

1960 – The submarine Tullibee was launched from Groton, CT. It was the first sub to be equipped with closed-circuit television.

1971 – Curt Flood, the baseball player whose court case resulted in free agency in all sports, quit the Washington Senators and moved to Denmark.

1980 – Studio 54 in New York, NY shut down due to various questionable activities three years and a day after opening its doors.

1982 – The trial of John W. Hinckley Jr. began in Washington, DC. Hinckley was later acquitted by reason of insanity for the shooting of President Ronald Reagan and three others.

1983 – Nolan Ryan, of the Houston Astros, broke a 55-year-old major league baseball record when he struck out his 3,509th batter of his career.

1985 – “We Are the World”, an album by the all-star assembly of artists calling itself USA for Africa, hit #1 in Billboard. It remained in that spot for three weeks.

2005 – The A380, the world’s largest jetliner, completed its maiden flight. The passenger capability was 840.

2005 – President George Bush signed a law that allowed for up to three years in prison for anyone that pirated music or films on the Internet.

2005 – Former American Idol hopeful Corey Clark claimed he and judge Paula Abdul had sex in the guest room of her house while he was still a contestant on the show.

2006 – In New York, NY, construction began on the 1,776-foot Freedom Towner on the site of the former World Trade Center.

2014 – Popes John XXIII and John Paul II were declared saints in the first papal canonization since 1954.

2020 – The Blue Angels flew over Detroit, MI to thank essential workers who worked so hard during COVID-19.

Tags: A Look Back, April 27, Celebrity Birthdays, Days of the Year, Today in History