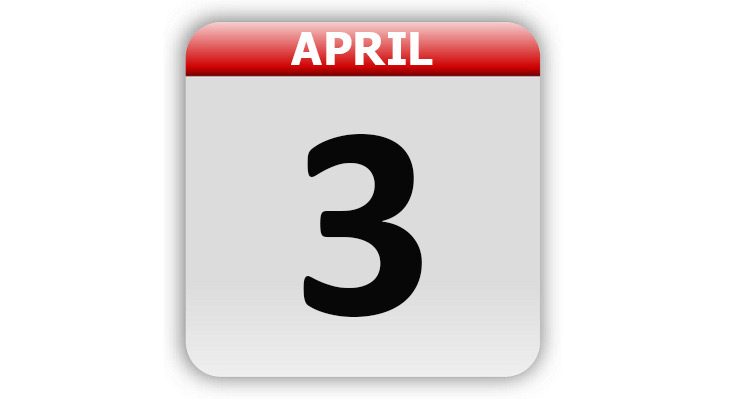 1860 – The first Pony Express riders left St. Joseph, MO and Sacramento, CA. The trip across country took about 10 days. The Pony Express only lasted about a year and a half.

1866 – Rudolph Eickemeyer and G. Osterheld patented a blocking and shaping machine for hats.

1882 – The American outlaw Jesse James was shot in the back and killed by Robert Ford for a $5,000 reward. There was later controversy over whether it was actually Jesse James that had been killed.

1933 – First Lady Eleanor Roosevelt informed newspaper reporters that beer would be served at the White House. This followed the March 22 legislation that legalized “3.2” beer.

1936 – Richard Bruno Hauptmann was executed for the kidnapping and death of the son of pilot Charles and Anne Lindbergh.

1942 – The Japanese began their all-out assault on the U.S. and Filipino troops at Bataan.

1953 – “TV Guide” magazine was published for the first time.

1956 – A deadly tornado twisted through Standale and Grand Rapids, MI. It left 307 injured and 19 dead. It caused $11 million in damages. It was only the second F-5 tornado to ever hit Michigan. Read more about it here.

1959 – The BBC banned the Coasters song “Charlie Brown” because of the word “spitball”. Two weeks later the BBC changed its position on the song.

1973 – Martin Cooper of Motorola made the first handheld mobile phone call to Joel S. Engel of Bell Labs, though it took ten years for the DynaTAC 8000X to become the first such phone to be commercially released.

1981 – The Osborne 1, the first successful portable computer, was unveiled at the West Coast Computer Faire in San Francisco, CA.

1982 – John Chancellor stepped down as anchor of the TV’s “The NBC Nightly News”. Roger Mudd and Tom Brokaw became the co-anchors of the show.

1989 – Pepsi dismissed Madonna as a spokesperson after her “Like a Prayer” video was called “blasphemous” by the Vatican.

1992 – The movie “Beethoven”, starring Charles Grodin and Bonnie Hunt in a story about a St. Bernard dog, premiered in theaters.

1996 – Unabomber suspect Theodore Kaczynski was arrested in a cabin in Montana. He pleaded guilty in January 1998 to five Unabomber attacks in exchange for a life sentence without chance for parole.

2000 – A U.S. Federal judge ruled that Microsoft had violated U.S. antitrust laws by keeping “an oppressive thumb” on its competitors. Microsoft said that they would appeal the ruling.

2008 – Apple became the number one music seller in the United States.

2008 – ATA Airlines, once one of the ten largest U.S. passenger airlines and largest charter airline, filed for bankruptcy for the second time in five years and ceased all operations.

2014 – David Letterman announced that he would be retiring from TV’s “The Late Show”.

2020 – The White House and Centers for Disease Control (CDC) began advising people to wear face coverings in public to prevent the spread of COVID-19.

Tags: A Look Back, April 3, Celebrity Birthdays, Days of the Year, Today in History