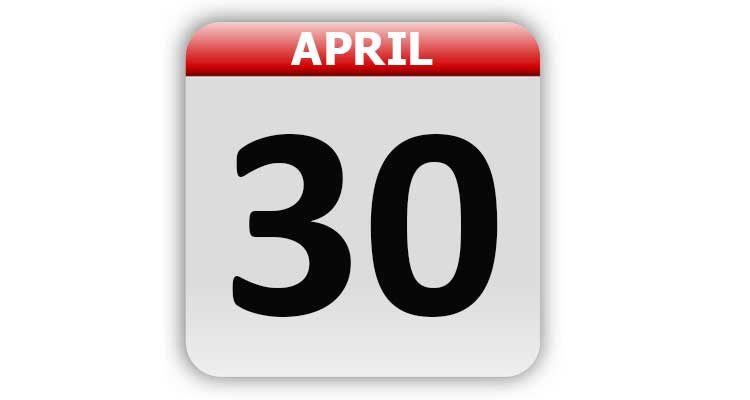 1789 – On the balcony of Federal Hall on Wall Street in New York, NY, George Washington took the oath of office to become the first elected U.S. President.

1803 – The U.S. purchased the Louisiana Territory from France for $15 million.

1900 – Hawaii was organized as an official U.S. territory.

1927 – Douglas Fairbanks and Mary Pickford became the first celebrities to leave their footprints in concrete at Grauman’s Chinese Theater in Hollywood, CA.

1939 – The first railroad car equipped with fluorescent lights was put into service. The train car was known as the “General Pershing Zephyr.”

1940 – Belle Martell was licensed in California by state boxing officials. She was the first American woman, prizefight referee.

1947 – The name of Boulder Dam, in Nevada, was changed back to Hoover Dam.

1952 – Mr. Potato Head became the first toy to be advertised on network television.

1964 – The FCC ruled that all TV receivers should be equipped to receive both VHF and UHF channels.

1977 – At the Pontiac Silverdome, in Pontiac, MI, Led Zeppelin played a show to an audience of 77,229. The event set a new record for attendance at a single-act concert.

1983 – The song “Beat It”, by Michael Jackson, hit number-one on the Billboard Hot 100. It stayed in that spot for three weeks.

1984 – President Ronald Reagan signed cultural and scientific agreements with China. He also signed a tax accord that would make it easier for American companies to operate in China.

1992 – Madonna’s bustier was one of the items stolen from Frederick’s of Hollywood during the rioting and looting that followed the Rodney King verdict. The store offered a $1,000 reward for its return.

1993 – Monica Seles was stabbed in the back during a tennis match in Hamburg, Germany. The man, Gunter Parche, called himself a fan of second-ranked Steffi Graf. He was convicted of causing grievous bodily harm and received a suspended sentence.

1997 – Ellen DeGeneres came out of the closet on a widely publicized episode of her ABC television sitcom, “Ellen”. Melissa Etheridge and kd lang were guests on the show.

1998 – United and Delta airlines announced their alliance that would give them control of 1/3 of all U.S. passenger seats.

1998 – Federal regulators fined a contractor $2.25 million for improper handling of oxygen canisters on ValuJet that crashed in the Florida Everglades in 1996.

2001 – The DEA called on the makers of painkillers to curb the distribution of OxyContin, a drug blamed for more than 100 fatal overdoses.

2001 – Government intern Chandra Levy was last seen in Washington, DC. Her remains were not found until May 22nd, 2002. California Congressman Gary Condit was questioned in the case because of his relationship with Levy.

2004 – Former NBA star Jayson Williams was found not guilty of the three most serious charges in the shooting death of a chauffeur at his mansion.

2004 – Michael Jackson pleaded not guilty to a 10 count indictment including charges of child imprisonment, performing lewd acts on a child under 14 years of age and administering intoxicating agents to a minor.

2012 – One World Trade Center became the tallest structure in New York, NY, when it surpassed the height of the Empire State Building.

2015 – NASA’s Messenger spacecraft crashed into the surface of Mercury. The space probe sent back more than 270,000 pictures to earth.

Save the Frogs Day

Tags: A Look Back, April 30, Celebrity Birthdays, Days of the Year, Today in History