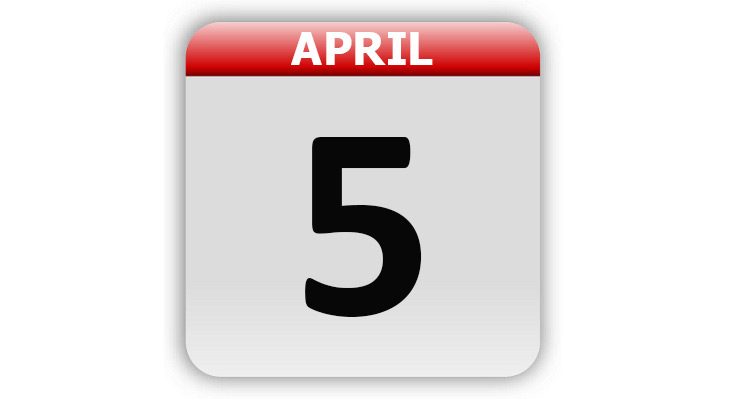 1621 – The Mayflower sailed from Plymouth, MA, on a return trip to England.

1778 – Daniel Boone was taken to Detroit as a British prisoner. Native Americans took him south later and he escaped.

1792 – President George Washington cast the first Presidential veto. The measure was for apportioning representatives among the states.

1838 – Grand Rapids, MI was incorporated as a village by a state legislative act.

1858 – Near midnight, the city of Grand Rapids, MI’s only bridge, at Bridge Street, was destroyed by a wall of flames. The bridge was replaced immediately.

1887 – Anne Sullivan taught Helen Keller the meaning of the word “water” as spelled out in the manual alphabet.

1933 – The first operation to remove a lung was performed at Barnes Hospital in St. Louis, MO.

1949 – A fire in a hospital in Effingham, IL, killed 77 people and led to nationwide fire code improvements in the U.S.

1951 – Americans Julius and Ethel Rosenberg were sentenced to death for committing espionage for the Soviet Union.

1961 – Barbra Streisand made her network TV debut singing “A Sleepin’ Bee” and “When the Sun Comes Out” on “The Tonight Show”.

1987 – FOX Broadcasting Company launched the TV shows “Married….With Children” and “The Tracey Ullman Show”. The two shows were the beginning of the FOX lineup.

1991 – An ASA EMB 120 crashed in Brunswick, GA, killing all 23 aboard, including Senator John Tower and Astronaut Sonny Carter.

1993 – Construction began on the Rock and Roll Hall of Fame in Cleveland, OH.

1997 – “The Crocodile Hunter”,  a wildlife documentary television series hosted by Steve Irwin and his wife, Terri, premiered on Animal Planet.

1999 – In Laramie, WY, Russell Henderson pleaded guilty to kidnapping and felony murder in the death of Matthew Shepard.

2002 – Oprah Winfrey ended Oprah’s Book Club saying “It has become harder and harder to find books on a monthly basis that I feel absolutely compelled to share.”

2006 – Katie Couric confirmed that she was leaving NBC’s “Today Show” to anchor “The CBS Evening News”.

2010 – Twenty-nine coal miners were killed in an explosion at the Upper Big Branch Mine in West Virginia.

Tags: A Look Back, April 5, Celebrity Birthdays, Days of the Year, Today in History