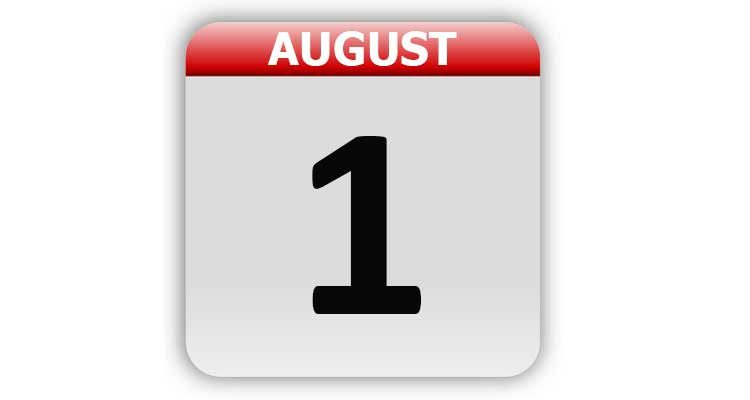 1774 – Oxygen was isolated from air by a chemist named Carl Wilhelm and scientist Joseph Priestly.

1873 – Andrew S. Hallidie successfully tested a cable car. The design was done for the city of San Francisco, CA.

1876 – Colorado became the 38th state to join the United States.

1893 – Henry Perky and William Ford were awarded the patent for shredded wheat.

1907 – The U.S. Army established an aeronautical division. It later became known as the U.S. Air Force.

1914 – Germany declared war on Russia at the beginning of World War I.

1957 – The North American Air Defense Command (NORAD) was created by the United States and Canada.

1960 – The world started “Twistin'” when Chubby Checker released his song “The Twist”.

1973 – The movie “American Graffiti” opened. It was directed by George Lucas.

1978 – Pete Rose, of the Cincinnati Reds, ended his streak of hitting in 44 consecutive games.

1981 – MTV made its debut at 12:01 am. The very first video to be shown was “Video Killed the Radio Star” by the Buggles. See video of the beginning of MTV.

1993 – Reggie Jackson was admitted into the Baseball Hall of Fame in Cooperstown, NY.

1994 – Michael Jackson and Lisa Marie Presley announced that they had married 11 weeks earlier.

1997 – The movie about a dog who played basketball, “Air Bud”, premiered in theaters.

1998 – Sandra Crouch was ordained as pastor of her church. This was in spite of the ban on woman ministers by the Church of God in Christ.

2007 – The I-35-W bridge that stretched over the Mississippi River in Minneapolis collapsed during rush hour. 13 people were killed in the tragedy. This situation triggered a nationwide awareness of maintenance and age problems with America’s roadway infrastructure.

Tags: A Look Back, August 1, Celebrity Birthdays, Days of the Year, Today in History