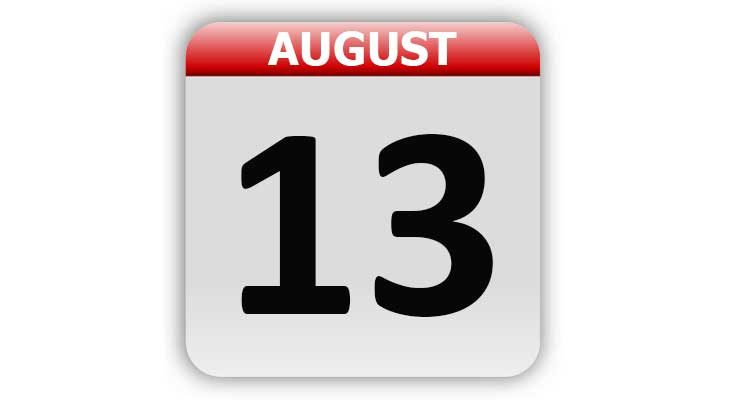 1846 – The American Flag was raised for the first time in Los Angeles, CA.

1889 – William Gray was granted a patent for the coin-operated telephone.

1918 – Women enlisted in the U.S. Marine Corps for the first time. Opha Mae Johnson was the first woman to enlist.

1931 – The first community hospital in the U.S. was dedicated in Elk City, OK.

1942 – The “Soybean Car” was unveiled by Henry Ford. The plastic bodied car weighed about 1000 pounds less than a car made of steel.

1960 – A balloon satellite, “Echo I,” allowed the first two-way telephone conversation by satellite to take place.

1961 – Berlin was divided by a barbed wire fence to halt the flight of refugees. Two days later work on the Berlin Wall began.

1969 – The Apollo 11 astronauts were released from a three-week quarantine to enjoy a ticker tape parade in New York, NY. That evening, at a state dinner in Los Angeles, CA, they were awarded the Presidential Medal of Freedom by President Richard Nixon.

1979 – The roof of the uncompleted Rosemont Horizon in Rosemont, IL, collapsed, killing five workers and injuring 16.

1982 – The movie “Fast Times at Ridgemont High” debuted in theaters.

1994 – A report indicated that aspirin not only helps reduce the risk of heart disease, but it also helps prevent colon cancer.

1997 – The animated series “South Park” made its debut on Comedy Central.

Tags: A Look Back, August 13, Celebrity Birthdays, Days of the Year, Today in History