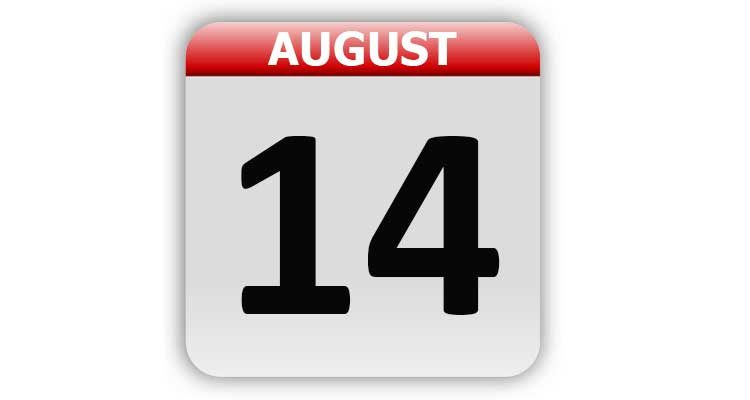 1848 – The Oregon Territory was established.

1888 – A patent for the electric meter was issued to Oliver B. Shallenberger.

1896 – Gold was discovered in Canada’s Yukon Territory. Within a year more than 30,000 people rushed to the area looking for gold.

1919 – A state law in Michigan went into effect requiring all drivers of motor vehicles to carry licenses while driving.

1941 – Congress appropriated the funds to construct the Pentagon (approximately $83 million). The building was the new home of the U.S. War Department.

1945 – It was announced, by President Harry Truman, that Japan had surrendered unconditionally. The surrender ended World War II.

1959 – Founding and first official meeting of the American Football League.

1975 – “The Rocky Horror Picture Show” opened at the USA Theatre in Los Angeles, CA. It went on to become the longest-running release in film history.

1980 – People for Ethical Treatment of Animals (PETA) was incorporated.

1985 – Michael Jackson outbid Paul McCartney and Yoko Ono for the ATV music-publishing catalog. Jackson paid $47.5 million for the rights to more than 250 songs written by John Lennon and Paul McCartney.

1995 – Shannon Faulkner became the first female cadet in the history of The Citadel, South Carolina’s state military college. She quit the school less than a week later.

1998 – A U.S. federal appeals court in Richmond, VA, ruled that the Food and Drug Administration had no authority to regulate tobacco. The FDA had established rules to make it harder for minors to buy cigarettes.

2000 – Valujet was ordered to pay $11 million in fines and restitution for hazardous waste violations in the crash that killed 110 people in 1996.

2000 – It was announced that Charles Grodin would be joining CBS’ “60 Minutes II” as a commentator.

2003 – A widescale power blackout affected the northeast United States and Canada. It was out for almost two weeks in some areas. Read more about it here.

2007 – Apple announced that the entire catalog of John Lennon would be available at iTunes Music Store.

2017 – The Corner Bar, in Rockford, MI, burned for hours after a gas meter exploded. The building was pretty much destroyed. They have since rebuilt and are open for business once again.

Tags: A Look Back, August 14, Celebrity Birthdays, Days of the Year, Today in History