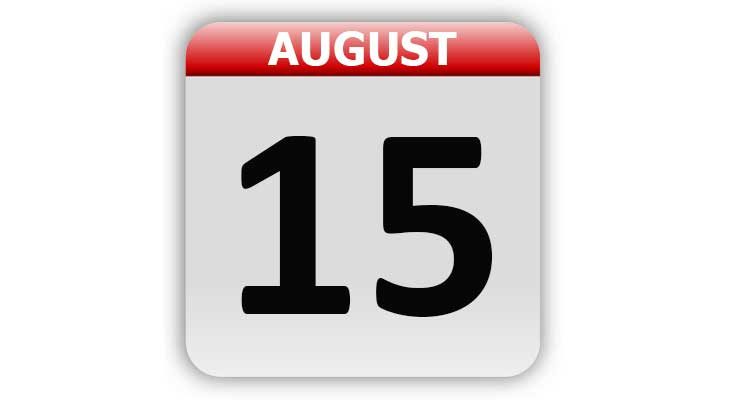 1847 – Postage stamps were used for the first time in Michigan. There were 5 and 10 cent stamps.

1848 – The dental chair was patented by M. Waldo Hanchett.

1877 – Thomas Edison wrote to the president of the Telegraph Company in Pittsburgh, PA. In the letter, Edison stated that the word, “hello” would be more appropriate of a greeting than “ahoy”, when answering the telephone.

1905 – A last attempt at commercial river transportation began. An “all water” route to Chicago, IL was designed and two boats were built — the “Grand” and the “Rapids”. The plan failed and in the fall of 1907 both boats were sold at auction.

1914 – The Panama Canal was officially opened to commercial traffic.

1939 – The movie “The Wizard of Oz” premiered at Grauman’s Chinese Theater in Hollywood, CA.

1945 – The Allies proclaimed V-J Day, a day after Japan agreed to surrender unconditionally.

1949 – In San Francisco, a stunt leap off the Golden Gate Bridge was performed for the first time.

1961 – Construction of the Berlin Wall was started by East German workers.

1965 – The Beatles played to nearly 60,000 fans at Shea Stadium in New York, NY. The event was later regarded as the birth of stadium rock.

1977 – The Big Ear, a radio telescope operated by Ohio State University as part of the SETI project, received a radio signal from deep space. The eventis named the “Wow! signal” from the notation made by a volunteer on the project.

1977 – Elvis Presley spent the last full day of his life driving around Memphis on his motorcycle with girlfriend Ginger Alden. That evening, he sees his dentist, Dr. Lester Hofman, to have several cavities filled.

1994 – The U.S. Social Security Administration became an independent government agency. It had been a part of the Department of Health and Human Services agency.

2001 – Astronomers announced the discovery of the first solar system outside our own — two planets orbiting a star in the Big Dipper.

2006 – Paris Hilton made the Guinness Book of World Records — as the world’s Most Overrated Person!

Tags: A Look Back, August 15, Celebrity Birthdays, Days of the Year, Today in History