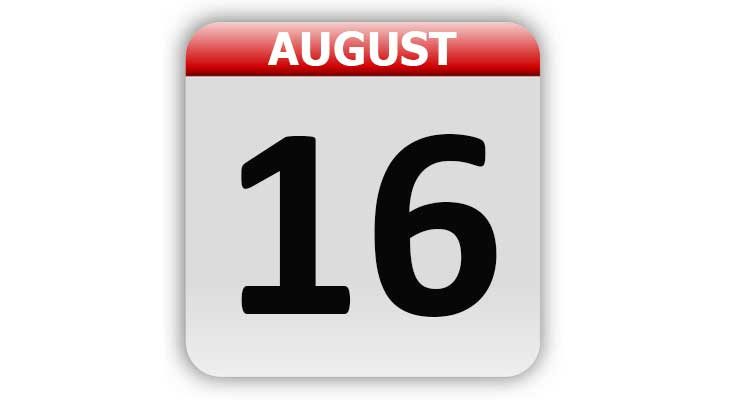 1812 – American General William Hull surrendered Michigan and Fort Detroit to the British Army without a fight during the War of 1812.

1858 – A telegraphed message from Britain’s Queen Victoria to U.S. President James Buchanan was transmitted over a recently laid trans-Atlantic cable. A weak signal forced a shutdown of the service in a few weeks.

1861 – President Abraham Lincoln prohibited the Union states from trading with the Confederate states.

1930 – The first color sound cartoon, Called “Fiddlesticks”, was made by Ub Iwerks.

1954 – The first issue of “Sports Illustrated” was published by Time, Inc.

1960 – Joseph Kittinger parachuted from a balloon over New Mexico at 102,800 feet, setting three records that held until 2012: High-altitude jump, free fall, and highest speed by a human without an aircraft.

1962 – Pete Best was let go from the Beatles, to be replaced two days later by Ringo Starr.

1977 – Elvis Presley died of heart failure at the age of 42 at his Graceland Mansion in Memphis, TN. His girlfriend Ginger Alden discovered his body on a bathroom floor. An autopsy found 14 drugs in his system.

1984 – The U.S. Jaycees voted to admit women to full membership in the organization.

1987 – Northwest Airlines Flight 255 crashed after take off in Detroit, MI, killing 154 people on board and two people on the ground. The only survivor was a 4 year old girl.

1999 – The game show “Who Wants to be a Millionaire”, with host Regis Philbin, debuted on TV.

2005 – Madonna starts out celebrating her 47th birthday riding a horse at her British estate. She was thrown from the horse and ended up in the hospital with three cracked ribs, a broken collarbone and a broken hand.

2008 – The Trump International Hotel and Tower in Chicago, IL, was topped off at 1,389 feet, at the time becoming the world’s highest residence above ground level.

2013 – The power went out at Google, causing all of their online services to crash for about five minutes. During the outage, internet traffic worldwide plummeted by about 40%.

2020 – The enormous August Complex fire in California was reported. It burned more than one million acres of land.

Tags: A Look Back, August 16, Celebrity Birthdays, Days of the Year, Today in History