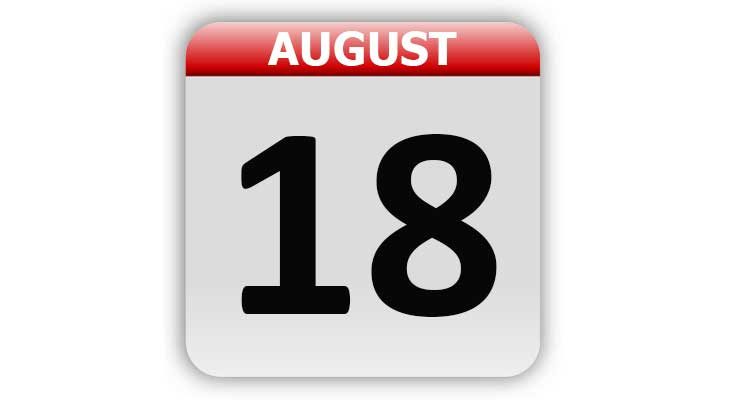 1587 – Virginia Dare became the first child to be born on American soil to English parents.

1894 – Congress established the Bureau of Immigration.

1916 – Abraham Lincoln’s birthplace, Hodgenville, KY, was made into a national shrine.

1920 – Tennessee ratified the 19th Amendment to the U.S. Constitution, guaranteeing women the right to vote.

1937 – The first FM radio construction permit was issued in Boston, MA. The station went on the air two years later.

1966 – The first pictures of earth taken from moon orbit were sent back to the U.S.

1969 – Jimi Hendrix performed his rendition of “The Star Spangled Banner” and brought Woodstock to a close.

1977 – Funeral services for Elvis Presley were held at Graceland in Memphis, TN. There were 150 mourners inside and 75,000 outside. Eighteen white limousines and a white hearse traveled to the mausoleum where he was laid to rest. His body has since been moved back to Graceland next to his mother’s grave.

1982 – The longest baseball game played at Wrigley Field, in Chicago, IL. The game went 21 innings before the Los Angeles Dodgers defeated the Cubs 2-1.

1992 – Larry Bird, after 13 years with the Boston Celtics, announced his retirement.

1997 – Patrick Swayze received a star on the Hollywood Walk of Fame.

Never Give Up Day

Tags: A Look Back, August 18, Celebrity Birthdays, Days of the Year, Today in History