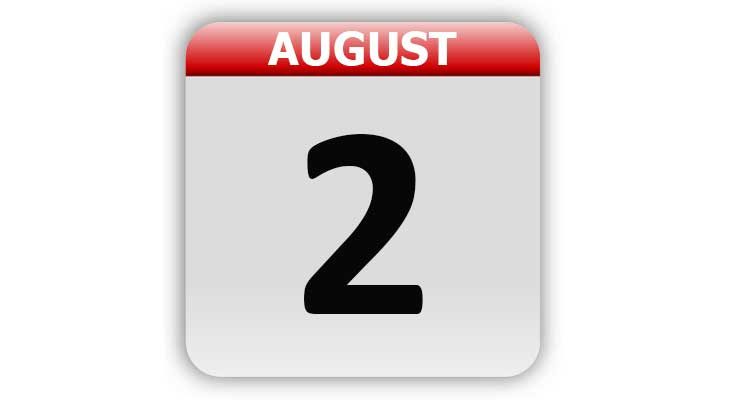 1776 – Members of the Continental Congress began adding their signatures to the Declaration of Independence.

1791 – Samuel Briggs and his son, Samuel Briggs, Jr., received a patent for a nail-making machine. They were the first father/son pair to receive a patent.

1858 – The first mailboxes were installed along the street in Boston, MA and New York, NY.

1861 – The first Income Tax was passed by the United States Congress. The revenues were intended for the war effort against the South. The tax was never enacted.

1892 – Charles A. Wheeler received a patent for the first escalator.

1923 – Vice President Calvin Coolidge became the 30th President of the United States, after the death of Warren G. Harding.

1923 – The first Lake Michigan car ferry began operation to cross the Straits of Mackinaw between the upper and lower peninsula’s of Michigan.

1926 – John Barrymore and Mary Astor starred in the first showing of the Vitaphone System. The system combined the pictures and sound for the movies.

1937 – The Marihuana Tax Act of 1937 was passed to render marijuana and all its by-products illegal.

1938 – In an experiment, bright yellow baseballs were used in a major league baseball game between the Brooklyn Dodgers and the St. Louis Cardinals. The hope was the balls would be easier to see.

1939 – Albert Einstein wrote a letter to President Franklin Roosevelt urging the U.S. to begin the Manhattan Project to develop a nuclear weapon.

1943 – The U.S. Navy patrol torpedo boat, PT-109, sank after being attacked by a Japanese destroyer. Lt. John F. Kennedy, future President, saved all but two of his crew.

1964 – The Pentagon reported the first of two North Vietnamese attacks on U.S. destroyers in the Gulf of Tonkin.

1965 – American’s first “Trimline” telephones were made available in Detroit, MI.

1983 – U.S. House of Representatives approved a law that designated the third Monday of January be a federal holiday in honor of Dr. Martin Luther King, Jr. The law was signed by President Ronald Reagan on November 2.

1985 – 137 people are killed when a Delta jumbo jet crashed at Dallas-Fort Worth International Airport.

1995 – China ordered the expulsion of two U.S. Air Force officers. The two were said to have been caught spying on military sights.

Tags: A Look Back, August 2, Celebrity Birthdays, Days of the Year, Today in History