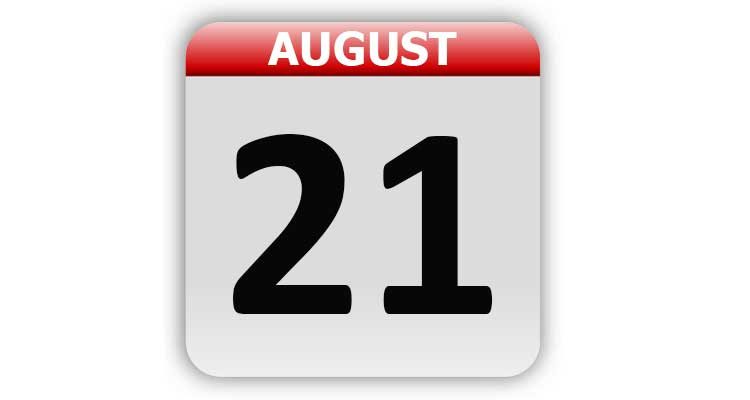 1841 – A patent for venetian blinds was issued to John Hampton.

1878 – The American Bar Association was formed by a group of lawyers, judges and law professors in Saratoga, NY.

1912 – Arthur R. Eldred became the first American boy to become an Eagle Scout — the highest rank in the Boy Scouts of America.

1923 – In Kalamazoo, MI, an ordinance was passed forbidding dancers from gazing into the eyes of their partner.

1965 – Gemini Five was launched from Cape Canaveral on an eight day mission.

1969 – The Gap opened their first store in San Francisco, CA.

1984 – Clint Eastwood received a star on the Hollywood Walk of Fame.

1989 – The space probe, Voyager 2, got close to the Neptune moon called Triton.

1993 – NASA lost contact with the Mars Observer spacecraft. The fate of the spacecraft was unknown. The mission cost $980 million.

1996 – President Bill Clinton signed the Health Insurance Portability and Accountability Act of 1996. The act made it easier to obtain and keep health insurance.

1997 – Hudson Foods Inc. closed a plant in Nebraska after it recalling 25 million pounds of ground beef that was potentially contaminated with E. coli. It was the largest food recall in U.S. history.

1997 – Cicely Tyson received a star on the Hollywood Walk of Fame.

1998 – Wesley Snipes received a star on the Hollywood Walk of Fame.

International Day of Remembrance and Tribute to the Victims of Terrorism

Tags: A Look Back, August 21, Celebrity Birthdays, Days of the Year, Today in History