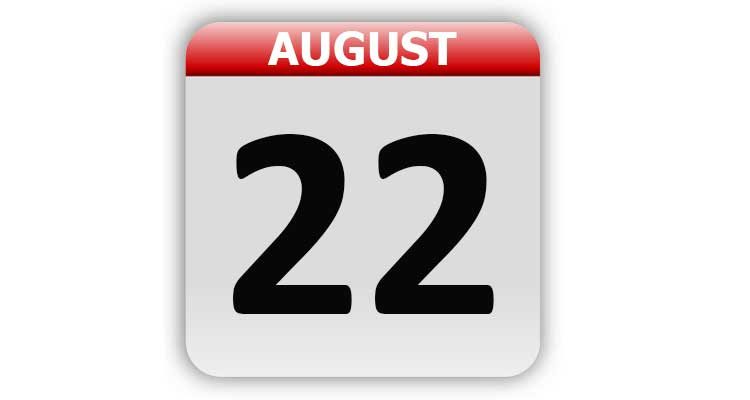 1864 – The International Red Cross was founded in Geneva, Switzerland.

1865 – William Sheppard was awarded the patent for liquid soap.

1902 – The Cadillac Motor Company was founded.

1902 – President Theodore Roosevelt became the first President of the United States to ride in an automobile, in Hartford, CT.

1906 – The Victor Talking Machine Company, of Camden, NJ, began to manufacture the Victrola. It sold for $200.

1911 – It was announced that Leonardo da Vinci’s “Mona Lisa” had been stolen from the Louvre Museum in Paris. The painting reappeared in Italy two years later.

1919 – The Grand Rapids Aero Club was founded in Grand Rapids, MI, to develop aviation and build an aerodrome in the city.

1984 – The last Volkswagen Rabbit rolled off the assembly line in New Stanton, PA.

2003 – Alabama Chief Justice Roy Moore was suspended after refusing to comply with a federal court order to remove a rock inscribed with the “Ten Commandments” from the lobby of the Alabama Supreme Court building.

2004 – In Oslo, Norway, a version of Edvard Munch’s painting “The Scream” and his work “Madonna” were stolen from the Munch Museum.

2007 – The Texas Rangers defeated the Baltimore Orioles 30-3, the most runs scored by a team in modern Major League Baseball history. The combined run total is also a Major League record.

National Be an Angel Day

National Take Your Cat to the Vet Day

Tags: A Look Back, August 22, Celebrity Birthdays, Days of the Year, Today in History