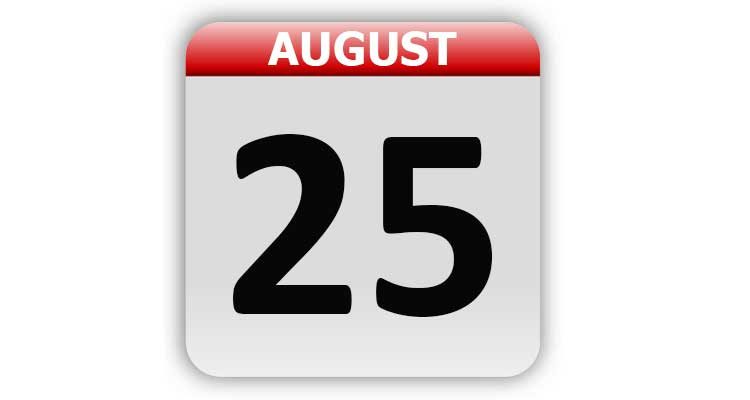 1840 – Joseph Gibbons received a patent for a seeding machine.

1916 – The National Park Service was established as part of the U.S. Department of the Interior.

1920 – The first airplane to fly from New York to Alaska arrived in Nome.

1939 – The movie “Wizard of Oz” opened in wide release around the United States.

1941 – President Franklin Roosevelt signed the bill providing funds for construction of the Pentagon.

1950 – President Harry Truman ordered the seizure of U.S. railroads in an effort to avert a strike.

1978 – The Turin Shroud, believed to be the burial cloth of Jesus Christ, went on display for the first time in 45 years.

1989 – The Voyager 2 spacecraft made its closest approach to Neptune, the second to the last planet in the Solar System at the time.

1991 – Linus Torvalds announced the first version of what would become Linux.

1998 – Gary Coleman pleaded innocent to a charge that he hit a women in a mall, where he is working as a security guard, after she asked for his autograph.

2001 – American singer Aaliyah and several members of her record company were killed when their overloaded aircraft crashed shortly after takeoff from Marsh Harbour Airport, Bahamas.

2012 – The Voyager 1 spacecraft entered interstellar space, becoming the first man-made object to do so.

2017 – Hurricane Harvey made landfall in Texas as a powerful Category 4 hurricane, the strongest hurricane to make landfall in the United States since 2004. Over the next few days, the storm causes catastrophic flooding throughout much of eastern Texas, killing 106 people and causing $125 billion in damage.

2021 – In Boyne City, Michigan, a truck hauling several bee hives overturned, releasing a swarm of bees, It was estimated that roughly 50 million beers were on the vehicle. Residents were alerted to keep their doors and windows closed. Beekeepers arrived to collect as many of the bees as they could.

National Kiss and Make Up Day

Tags: A Look Back, August 25, Celebrity Birthdays, Days of the Year, Today in History