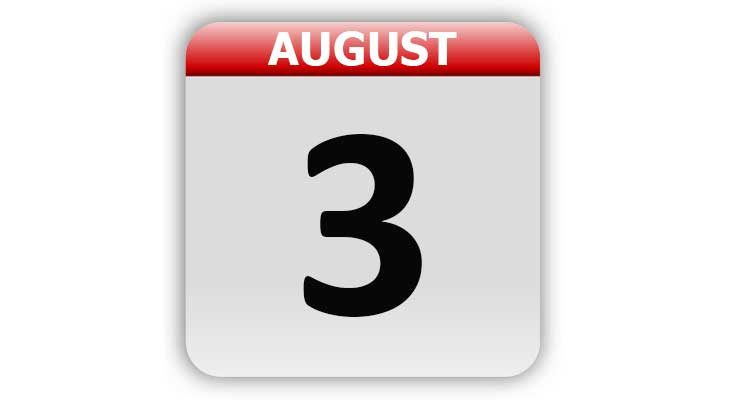 1492 – Christopher Columbus left Palos, Spain with three ships: the Pinta, the Nina and the Santa Maria. The voyage led him to what is now known as the Americas. He reached the Bahamas on October 12.

1922 – WGY radio in Schenectady, NY, presented the first full-length drama on the radio. It was “The Wolf”, written by Eugene Walter.

1923 – Calvin Coolidge was sworn in as the 30th President of the U.S. after the sudden death of President Warren G. Harding.

1946 – Santa Claus Land opened in Santa Claus, IN. It was the world’s first themed amusement park.

1958 – The nuclear submarine USS Nautilus became the first vessel to cross the North Pole underwater. The mission was known as “Operation Sunshine.”

1977 – Tandy Corporation announced the TRS-80. It was one of the world’s first mass-produced home computers. Read more about it here.

1981 – U.S. air traffic controllers went on strike. They were fired by President Ronald Reagan, just as he had warned them they would be.

1985 – Mail service returned to a nudist colony in Paradise Lake, FL. Residents promised that they’d wear clothes, or stay out of sight, when the mail carrier came to deliver their mail.

1999 – Patsy Cline received a star on the Hollywood Walk of Fame.

1999 – Arbitrators ruled that the U.S. government must pay the heirs of Abraham Zapruder $16 million for his footage of the Kennedy assassination in Dallas, TX.

2004 – In New York City, The Statue of Liberty opened to the public for the first time since the September 11th attacks. Because of security concerns, tourists are not allowed to climb to the crown.

2004 – NASA launched the spacecraft Messenger. The 6-1/2 year journey was to begin orbiting the planet Mercury in March 2011. However, on April 30, 2015, Messenger crashed into the surface of Mercury. Before it crashed it had been able to send back more than 270,000 pictures.

Tags: A Look Back, August 3, Celebrity Birthdays, Days of the Year, Today in History