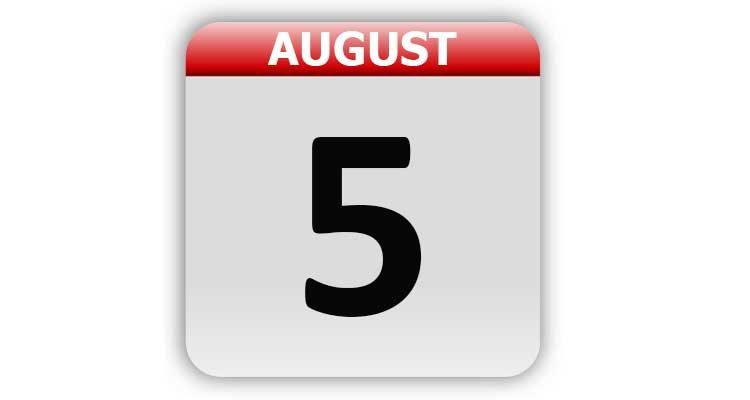 1620 – The Mayflower departed from Southampton, England on its first attempt to reach North America.

1833 – The village of Chicago, IL was incorporated. The population at the time was approximately 250.

1882 – The Standard Oil Company of New Jersey was established.

1884 – The cornerstone for the Statue of Liberty was laid on Bedloe’s Island (now Liberty Island) in New York Harbor.

1914 – The first electric traffic lights were installed in Cleveland, OH.

1921 – The first play-by-play broadcast of a baseball game was done by Harold Arlin, on KDKA Radio, in Pittsburgh, PA. The game was between the Pirates and Philadelphia.

1923 – Henry Sullivan became the first American to swim across the English Channel.

1957 – TV’s “American Bandstand”, hosted by Dick Clark, made its network debut on ABC. Until this day the show had been a local show in Philadelphia, PA since 1952.

1958 – Herbert Hoover eclipsed John Adams as having the longest retirement of any former President until that time. Hoover would live another 6 years. His record 31 years, 7 months, and 16 days has since been eclipsed by Jimmy Carter.

1966 – In New York, NY, groundbreaking began for the construction of the original World Trade Center.

1969 – The Mariner 7 made its closest fly-by Mars. Photographs and other data were sent back to Earth.

1974 – President Richard Nixon said that he expected to be impeached. Nixon had ordered the investigation into the Watergate break-in to halt.

1975 – Stevie Wonder signed a $37 million deal with Motown Records, the biggest at that time.

1981 – Olivia Newton-John received a star on the Hollywood Walk of Fame.

2009 – Google purchased its first public company. The company was a video software maker named On2 Technologies.

2011 – NASA announced that its Mars Reconnaissance Orbiter had captured photographic evidence of possible liquid water on Mars during warm seasons.

Tags: A Look Back, August 5, Celebrity Birthdays, Days of the Year, Today in History