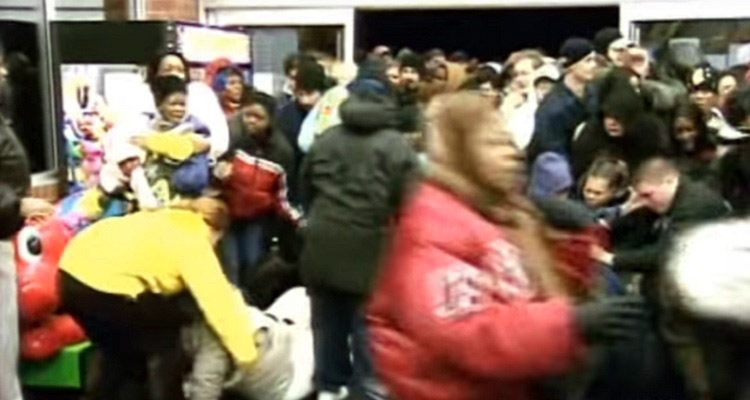 It’s hard to believe that this happened eleven years ago, but it is what caused my “Black Friday Embarrassment” back in 2005…

I was down visiting a friend in St. Louis, MO, for Thanksgiving that year. He hosted what was probably the first “friendsgiving” that I ever attended. “Friendsgiving” is the cool, hip term that people use now days to refer to a group of friends gathering for a Thanksgiving feast.

There were probably 8-10 people at my friend’s house that weekend. Most were from out of town, so we all crashed at his house on Thanksgiving evening. Some of these people I was meeting for the first time.

On Black Friday morning, we were all sitting around the living room…drinking coffee, having a donut or two for breakfast, and watching TV.

One of the lead stories that morning was the chaos that happened with shoppers rushing into the stores to get Black Friday deals. One of the videos that aired showed a Walmart store where there was so much pushing and shoving, that some people actually got trampled. One lady even fell and lost her wig!

As the news anchor was introducing the story, he said something like “And from Grand Rapids, Michigan…”. Immediately every set of eyes in the living room looked over in my direction. One of the people I had just met the day prior asked, “Isn’t that where you are from?”

This was probably one of the only times I have ever been embarrassed to admit where I was from. I sank down in my chair and replied, “yes it is, but not everyone in our city acts like that”.

They continued to show that video over and over and on multiple television channels that weekend. Every time it was on the television, I could feel eyes glancing over in my direction. Yes, perhaps I was one of “those” people from the city known as Grand Rapids, Michigan.

Here is the promo that WOOD TV 8 ran of their coverage of the story from Walmart that morning back in 2005. I think it was actually TV-8’s video that ended up going nationwide to television stations across the United States…