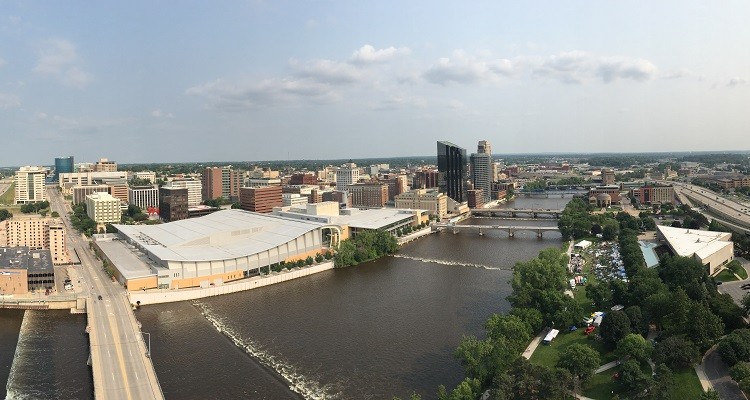 A Change to the Grand Rapids Skyline?

As a child I remember going to my eye doctor and thinking how cool it was that he was on the 13th floor of the McKay Tower. (Yes, there was a 13th floor). At the time, that was the tallest building in Grand Rapids. In the early 80’s the Amway Grand Plaza opened and they took over the title of the tallest building. That title has changed hands over the years, with Bridgewater Place and River House Condominiums currently holding that award.

The Hinman Company has announced plans to build a 42-story, 418 foot tall tower on what is currently a parking lot. (The proposed building would be 12 feet higher than River House.) The wedge shaped parcel of property is bordered by Fulton Street, Louis Street and Ionia Avenue. (At one time this was the parking lot that Clearchannel — now iHeart Media — employees parked in. They also parked some of their station vehicles in this lot.) The plans for the new building includs a lobby, approximately 10 floors of hotel rooms, an amenity floor (I’m not sure what that is), and apartments on the top remaining floors.

I’ve always said that Grand Rapids needs another high rise. I think it really gives credibility to a city. How would you feel about visiting a city where their tallest building was only 10-12 stories? But, when you see a city with some decent size buildings, and it starts to scream of a successful and prosperous city.

Now for the big stumbling block…The plans require approval from the Grand Rapids Historic Preservation Commission. (Their next meeting is July 6th.) You see, the land Hinman wants to build on is just inside the jurisdiction of a historic preservation district. That means the Commission has a chance to comment, and make recommendations, on projects regarding the architecture of the building…including the height of the tower. In the past, the Historic Preservation Commission has had issues with how tall proposed buildings have been within their district. Could this become an issue for the Hinman Company?

Now I realize the reason for having a Preservation Commission. We’ve lost some very cool buildings in the past (the old City Hall is one example). But, let’s not stifle the continue growth and perception of the City of Grand Rapids. If I’m traveling and pull into a new city — I’d rather see a 42-story building instead of a surface parking lot.

I’m curious what you think? If given a choice of a parking lot or a 418 foot building downtown — which would you prefer? Leave your reply below!

To read more about the proposed building, here is an article from mlive and another from WOOD TV 8.