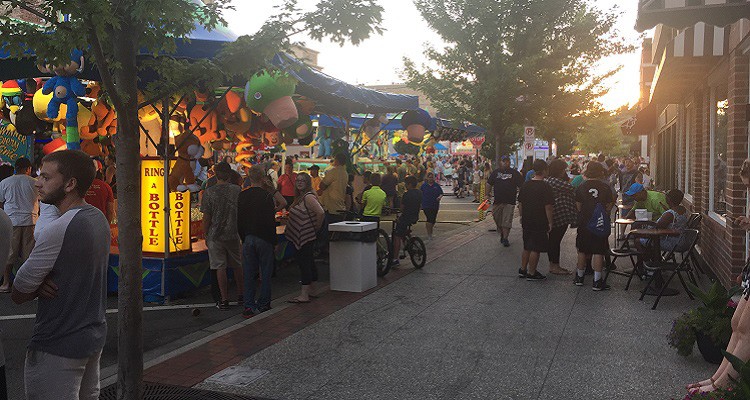 I haven’t had the chance to get out to the lakeshore much this summer, so on Friday night, August 5, 2016, I decided to head to Grand Haven and check out the Coast Guard Festival.

It’s always amazing the number of people you see at a festival, or fair, in Michigan during the summer months. And the weather…top notch! You could not have asked for better weather to be walking the streets of downtown Grand Haven.

I strolled along the carnival rides and was amazed to find “The Zipper”! This is one ride I have NEVER been on and will NEVER go on! I know my limits and there is no way you are getting me on that ride. 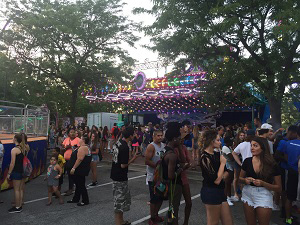 A month or so back, I criticized the Ionia Free Fair for not having the classic “Himalaya” ride. They had a ride very similar, but it was called “The Flying Bobs”. Sorry, that just doesn’t cut it. Thank You Coast Guard Festival for actually having a genuine “Himalaya” ride. Although, with the all updates and lighting, it doesn’t look much like the same old ride…but at least the name is correct! (Read my post on the Ionia Free Fair.)

There was also a new ride I have never seen before. It’s called “Air Raid” and it’s quite the interesting ride. Once again, I know my limits and you will not see me on this ride either. 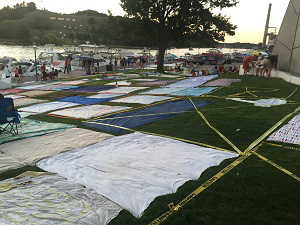 After a walk through the rides, it just wouldn’t be a trip to Grand Haven without a walk down the boardwalk towards the pier. 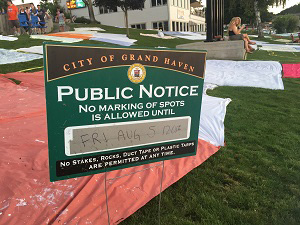 The Coast Guard Festival fireworks are on Saturday, August 6th, but according to a sign, people could start staking their claim to their lawn seats along the channel as of 12:01 am on Friday morning. And they did! I was amazed at all the blankets and tape to mark off “our seats” for the fireworks — a full two days in advance. It was quite the sight to see. I feel sorry for anyone who didn’t head out to put down a blanket, because there will not be many places left to sit! 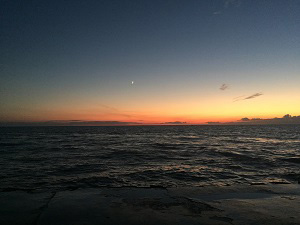 I made it to the end of the pier just after sunset, but the sky was still stunning with it’s fiery orange glow. And of course I had to take a selfie. See the wave crashing over the pier in the bottom of the photo? I would like thank that wave for covering my feet up to about my ankles while standing there taking that picture. It was a wet walk back into town! 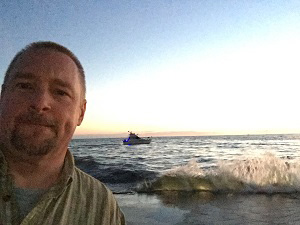 And before we left, the Musical Fountains were just beginning. I had to stop to do a live video on Facebook. It was the first time I had used the “live” feature. (You can watch the video by clicking here.) They upgraded the Musical Fountains about 10 years ago with new lighting. I guess I’m pretty old school, I actually think the old lighting was better. In the past, it was like every fountain had it’s own individual light. With the new system, the lights just shine on all the fountains at once. The individual streams of water just don’t stand out as much as they used to. I guess newer is not always better (at least in my opinion). Still always a great, unique feature to take people to see when they are visiting West Michigan. Here is the official website for The Musical Fountain.

I didn’t get a chance to tour any of the Coast Guard ships or boats. One of these years I do hope to get out there earlier in the day to take advantage of the tours.

For more information, here is the official website for the Coast Guard Festival 2016, It runs through Sunday, August 7th, 2016.