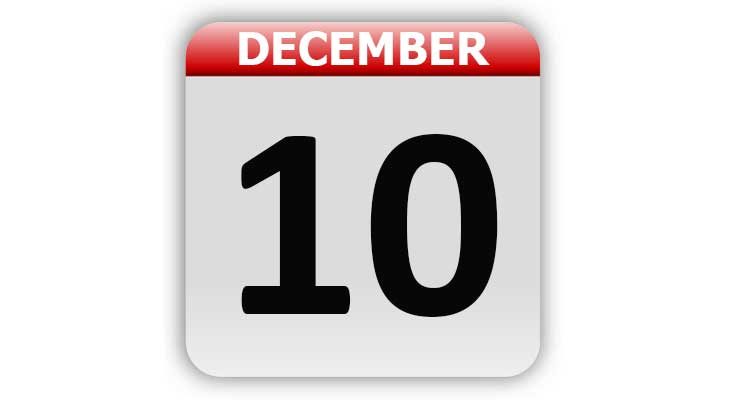 1869 – Women were granted the right to vote in the Wyoming Territory.

1906 – President Theodore Roosevelt became the first American to be awarded the Nobel Peace Prize for helping mediate an end to the Russo-Japanese War.

1927 – The Grand Old Opry made its first radio broadcast from Nashville, TN.

1931 – Jane Addams became a co-recipient of the Nobel Peace Prize, she was the first American woman to do so.

1962 – The movie “Lawrence of Arabia” debuted in theaters and went on to win an Oscar for Best Picture.

1963 – President Lyndon Johnson called on Congress to pass civil rights legislation without delay, saying “the issue cannot be ignored for another 100 years or even another 100 days.”

1963 – Donny Osmond made his debut with the Osmonds on the NBC television show “The Andy Williams Show.”

1965 – Sugar Ray Robinson permanently retired from boxing. By winning the middleweight title five times, he had more successful title bouts to his credit than any fighter in history.

1978 – The film, “Superman: The Movie”, starring Christopher Reeves premiered in theaters.  The film cost $55 million to make, and was the most expensive movie ever made at that time.

1984 – The single “Do They Know It’s Christmas” was released by Band-Aid. The group was assembled to aid in famine relief.

1991 – Alan Freed, the legendary disc jockey who coined the term “rock and roll,” got a posthumous star on the Hollywood Walk of Fame.

1993 – The crew of the Space Shuttle Endeavor deployed the repaired Hubble Space Telescope into Earth’s orbit.

1994 – Advertising executive Thomas Mosser of North Caldwell, NJ, was killed by a mail bomb that was blamed on the Unabomber.

1998 – 250 miles above the Earth, six astronauts opened the doors to the new International Space Station.

2001 – The movie “The Lord of the Rings: The Fellowship of the Ring” premiered in theaters.

2008 – Gary Sinise, who played the fictional Lieutenant Dan in “Forrest Gump”, received the Presidential Medal of Freedom from President George Bush in the Oval Office.

2009 – James Cameron’s sci-fi movie “Avatar” premiered in theaters in London, becoming the highest grossing movie ever at the time.

2016 – The movie “Rogue One: The Star Wars Story” debuted in theaters.

Tags: A Look Back, Celebrity Birthdays, Days of the Year, December 10, Today in History