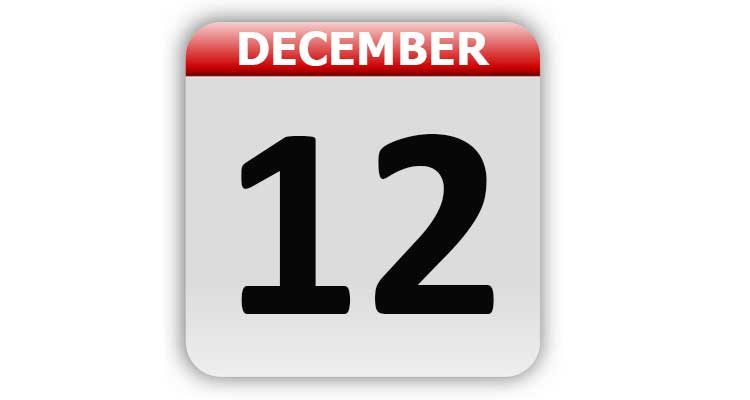 1787 – Pennsylvania became the second state to ratify the U.S. Constitution.

1800 – Washington, DC, was established as the capital of the United States.

1899 – George F. Grant, an African-American dentist and golfer, receives a patent for a wooden golf tee.

1901 – The first radio signal to cross the Atlantic was picked up near St. John’s Newfoundland, by inventor Guglielmo Marconi. The transmission was the letter “S” in Morse Code.

1912 – The Mother’s Day International Association was incorporated with the purpose of furthering meaningful observations of Mother’s Day.

1915 – The first all-metal aircraft, the German Junkers J1, made its first flight.

1917 – Father Edward Flanagan opened Boys Town in Nebraska. The farm village was for wayward boys. In 1979 it was opened to girls.

1946 – A United Nations committee voted to accept a six-block tract of Manhattan real estate to be the site of the UN’s headquarters. The land was offered as a gift by John D. Rockefeller Jr.

1951 – The U.S. Navy Department announced that the world’s first nuclear powered submarine would become the sixth ship to bear the name Nautilus.

1957 – Disc Jockey Al Priddy of KEX, Portland, Oregon, was fired for playing Elvis Presley’s rendition of “White Christmas”. He had violated the radio station’s ban against the song.

1985 – Dionne Warwick received a star on the Hollywood Walk of Fame.

1989 – New York real estate baroness Leona Helmsley, who has been nicknamed the “queen of mean,” was fined $7 million and sentenced to four years in prison for tax invasion.

1991 – At the Stanford Linear Accelerator Center (SLAC) in California, the first web server outside of Europe was installed.

1995 – The U.S. Senate stopped a constitutional amendment giving Congress authority to outlaw flag burning and other forms of desecration against the American flag.

1996 – Clint Black got a star in the Hollywood Walk of Fame.

1997 – The Justice Department ordered Microsoft to sell its Internet Explorer browser separately from its Windows operating system to prevent it from building a monopoly of Web access programs.

1997 – Denver Pyle received a star on the Hollywood Walk of Fame.

1998 – The House Judiciary Committee rejected censure and approved an article of impeachment against President Bill Clinton. The case is submitted to the full House.

2000 – The U.S. Supreme Court found that the recount ordered by the Florida Supreme Court in the 2000 Presidential election was unconstitutional. Vice President Al Gore conceded the election to Texas Gov. George W. Bush the next day.

2000 – Timothy McVeigh, over the objections of his lawyers, abandoned his final round of appeals and asked that his execution be set within 120 days. McVeigh was convicted of the April 1995 truck bombing of the Alfred P. Murrah Federal Building in Oklahoma City, OK, that killed 168 and injured 500.

2001 – In Beverly Hills, CA, actress Winona Ryder was arrested at Saks Fifth Avenue for shoplifting and possessing pharmaceutical drugs without a prescription. The numerous items of clothing and hair accessories were valued at $4,760.

2007 – Frank Sinatra was honored on what would have been his 92nd birthday with the first public display of a postage stamp featuring his fedora hatted likeness.

Tags: A Look Back, Celebrity Birthdays, Days of the Year, December 12, Today in History