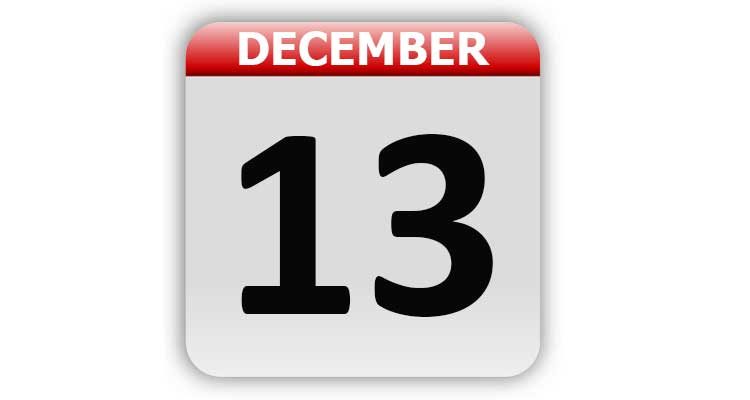 1636 – The United States National Guard was created when militia regiments were organized by the General Court of the Massachusetts Bay Colony to defend the colony against the Pequot Indians.

1809 – The first abdominal surgical procedure was performed in Danville, KY, on Jane Todd Crawford. The operation was performed without an anesthetic.

1884 – Percy Everitt received a patent for the first coin-operated scale.

1913 – The Sunday New York World printed a puzzle called a “Word cross,” created by Liverpulian Arthur Wynne. The puzzle was a success and became a weekly feature. The name eventually evolved into “crossword.”

1913 – It was announced by authorities in Florence, Italy, that the “Mona Lisa” had been recovered. The work was stolen from the Louvre Museum in Paris in 1911.

1913 – The Federal Reserve System was established as the first U.S. federal bank.

1966 – The television rights to the first four Super Bowls were sold to CBS and NBC for a total of $9.5 million.

1972 – Eugene Cernan and Harrison Schmitt began the third and final extra-vehicular activity (EVA) or “Moonwwalk” of Apollo 17. To date they are the last humans to set food on the Moon.

1978 – The Philadelphia Mint began stamping the Susan B. Anthony dollar. The coin went into circulation the following July.

1982 – The Sentry Armored Car Company in New York, NY, discovered that $11 million had been stolen from its headquarters overnight. It was the biggest cash theft in U.S. history.

1985 – The movie adaptation of the board game “Clue” premiered in theaters.

1985 – Phil Collins made his American television acting debut. He played a drug dealer on “Miami Vice”.

1988 – A bankruptcy judge in Columbia, SC, ordered the assets of the troubled PTL television ministry sold to a Toronto real estate developer for $65 million.

1993 – The U.S. Supreme Court ruled that people must receive a hearing before property linked to illegal drug sales can be seized.

1996 – The movie “Mars Attacks”, produced and directed by Tim Burton, premiered in theaters.

2000 – Vice President Al Gore conceded the 2000 Presidential election to Texas Gov. George W. Bush. The Florida electoral votes were won by only 537 votes, which decided the election. The election had been contested up to the U.S. Supreme Court, which said that the Florida recount (supported by the Florida Supreme Court) was unconstitutional.

2001 – The U.S. government released a video tape that showed Osama bin Laden and others discussing their knowledge of the terrorist attacks on the United States on September 11, 2001.

2001 – NBC-TV announced that it would begin running hard liquor commercials. NBC issued a 19-point policy that outlined the conditions for accepting liquor ads.

2002 – The movie “A Beautiful Mind” premiered in theaters.

2003 – Saddam Hussein was captured when American troops found the former dictator of Iraq hiding in a hole on a farm near Tikrit. He surrendered without a fight, but refused to cooperate with interrogators.

Day of the Horse

Tags: A Look Back, Celebrity Birthdays, Days of the Year, December 13, Today in History